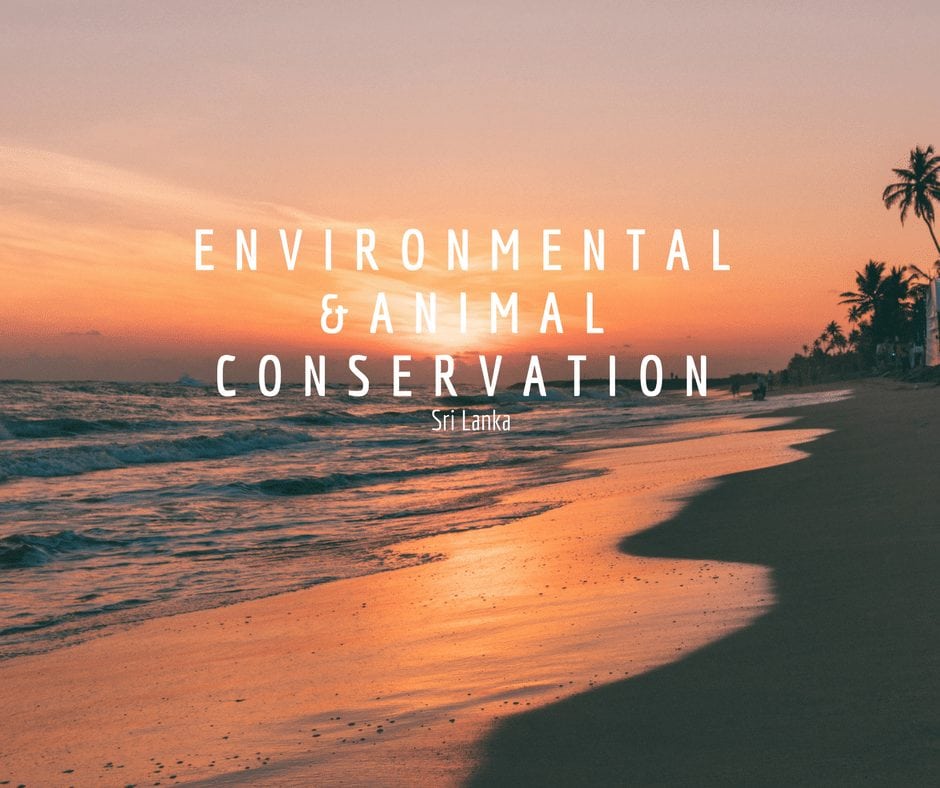 Sri Lanka is a land of beautiful wonder, however, something that’s evident when walking around the country is that it’s at the forefront of economic and touristic growth whilst at an environmental tipping point. Sri Lanka is trying to maintain it’s stunning landscapes against the overwhelming demands and rising consumption of plastics.

Luckily Sri Lanka has major organisations in place to tackle issues they know are occurring:

Sri Lanka is home to roughly 123 species of mammals, 41 of which are threatened (9 critically).

The Sri Lanka Wildlife Conservation Society (SLWCS) is an international, community-based organization committed to the research, conservation and protection of Sri Lanka’s endangered wildlife, communities, and natural habitats. Elephants have been revered for centuries in Asia, playing an important role in the continent’s culture and religion. They are also playing a critical role in maintaining the region’s forests. But their habitat, especially in Sri Lanka, has been shrinking and Asian Elephants are now endangered. 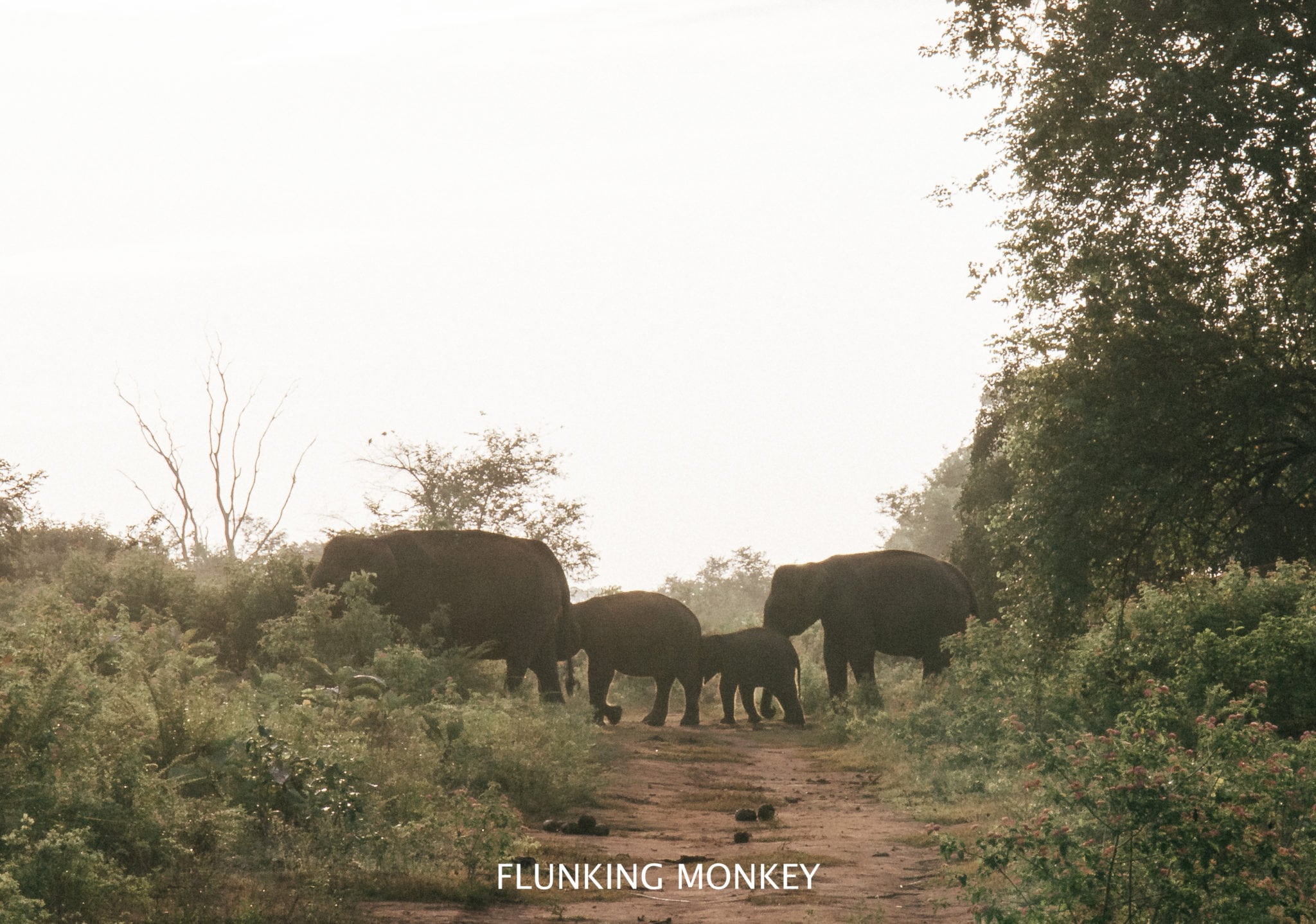 Due to increasing agricultural demands on the land, large shifts in the land were occurring. This reduction of natural habitat was causing increasing elephant raids and ongoing human vs. elephant conflicts. A major project called Orange Elephant was started by SLWCS, to tackle the effects of these shifts in land use. Oranges, limes and mandarin were planted and used as natural elephant deterrent and provided supplementary economic income to the local farmers at the heart of these conflicts. This project spread over 8 different high-risk villages and was awarded in 2015 the Most Innovative development project.

This has now caught the interest of national supermarkets who now work with these farmers to mass purchase these oranges. Allowing more trees to be planted along the borders of the national parks. This has significantly reduced the ongoing annual number of elephant and human deaths related to these conflicts.

You can Get Involved with this project here: https://www.slwcs.org/get-involved-cfvg

The Department of Wildlife conservation in Sri Lanka have established over 26 national parks since 1938 which together cover an area of 5,734 km2. All of the land in national parks are state-owned and the entire habitat is protected

One of the parks I was lucky to have the opportunity to visit was The Uduwalawe National park. Open since 1972 it is home to 225 elephants along with leopards, Water Buffalos, boars and a large variety of bird species both native and migratory. There are also 100 to 215 flora species native to the park. 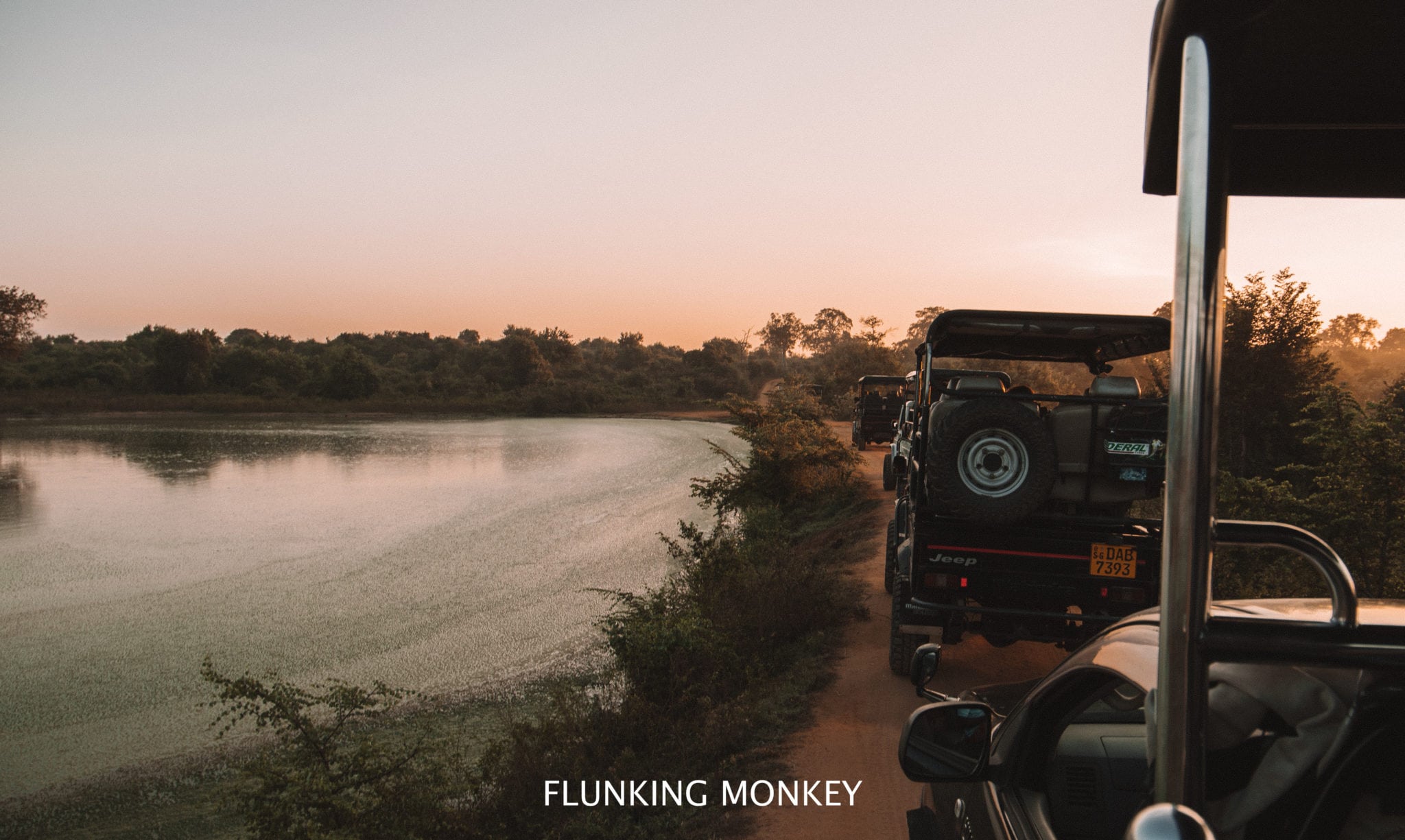 During our time in the Uduwalawe national park, we stayed at the Master Campers Lanka. This small Luxury all-inclusive 7 tent campsite provide you with the best level of glamping at £500 per night for a 2-3 person tent in the heart of the National Park region.

The main purpose of visit to these parks by tourists is to participate in animal/elephant safaris. With these elephant safaris, there are still pros and cons, they work differently and cannot truly be compared to elephant conservation programs. I appreciated that Master campers Lanka provided us with a private jeep, with a knowledgeable local guide, Roy who had a great eye for spotting wildlife.

He had pointed out that The Uduwalawe national park was really active in its control of species burning the invasive lantana plant. Unfortunately, even this landscape has suffered from large amounts of parasitic trees, brought in during colonial rule damaging the landscape.

One thing that was evident was the number of jeeps that scout around the park for their opportune sighting of Elephants and other large wildlife.  Although it may seem invasive during the time animals are spotted, these are very rare occasions and the animals often avoid the “main” roads which are why sightings tend to become crowded. To give you a scale we saw around 4% of the Elephants that roam the park. 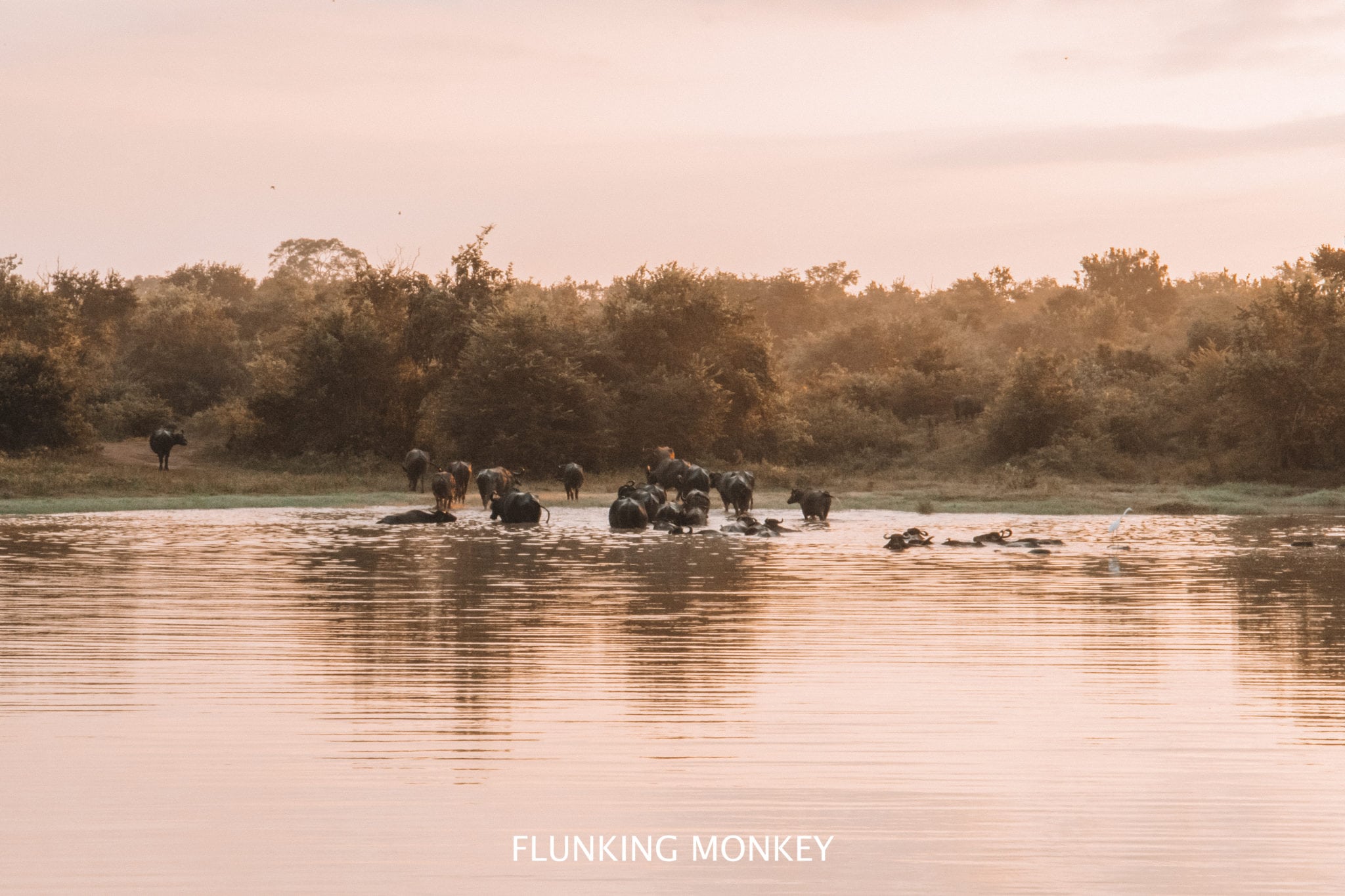 Good Guides and drivers will take you away from the main roads and throughout a large number of trails that cover the 308.21 km2 of the park. Most often we spotted most animals when we were the sole jeep.

On the southern coasts of Sri Lanka from Mirissa to Galle, you will see signs advertising Sea Turtle conservation. As positive as a message, this sends from the coastal communities showcasing their will to preserve marine life, in all honesty not all of these are safe, some if not most are just money scams for tourists.

I originally had planned to visit a Sea Turtle Hatchery in Habaraduwa which I’m now glad I avoided as it seemed this hatchery was much more weighted toward financial gain then providing conservation and education. 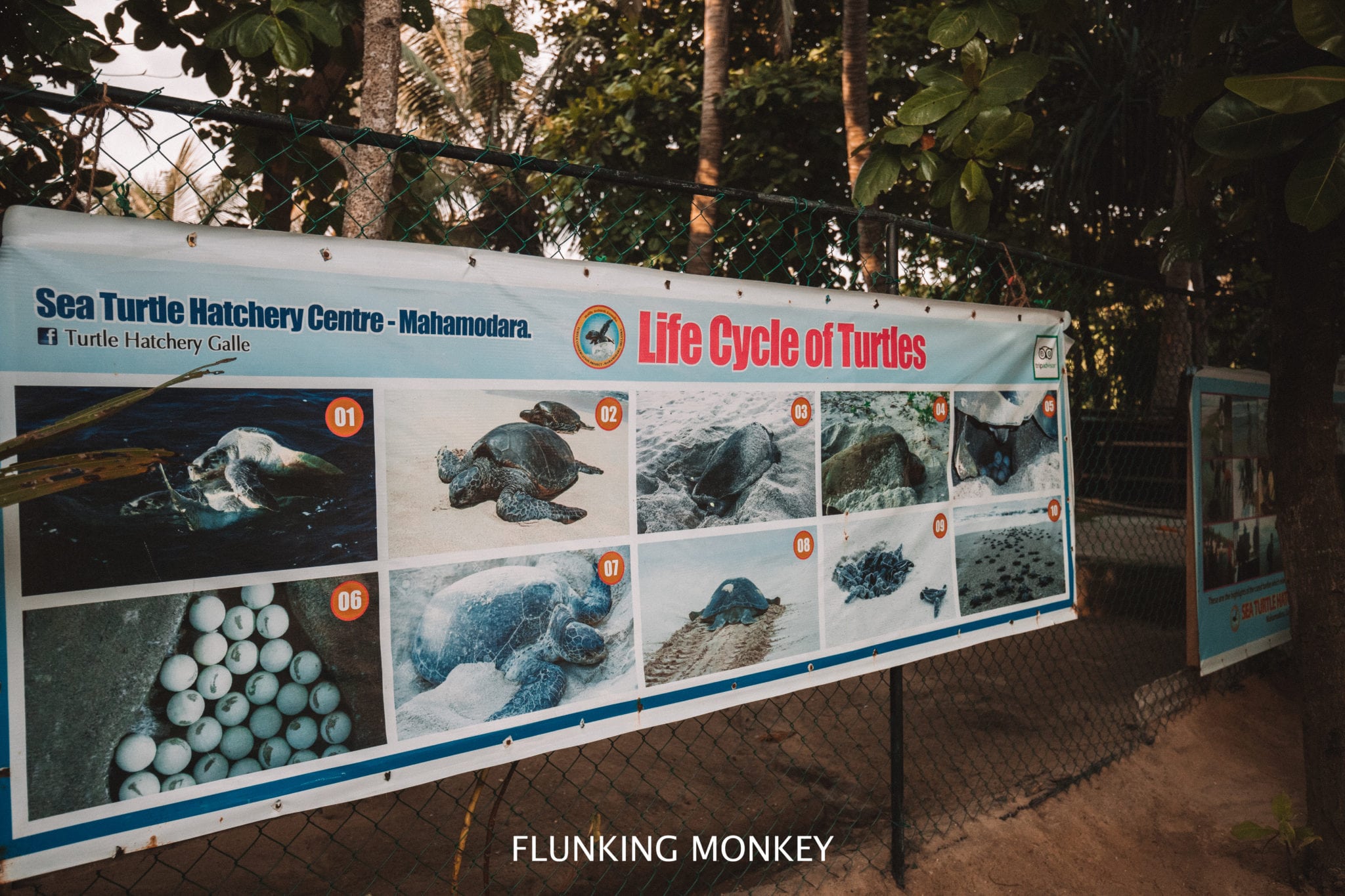 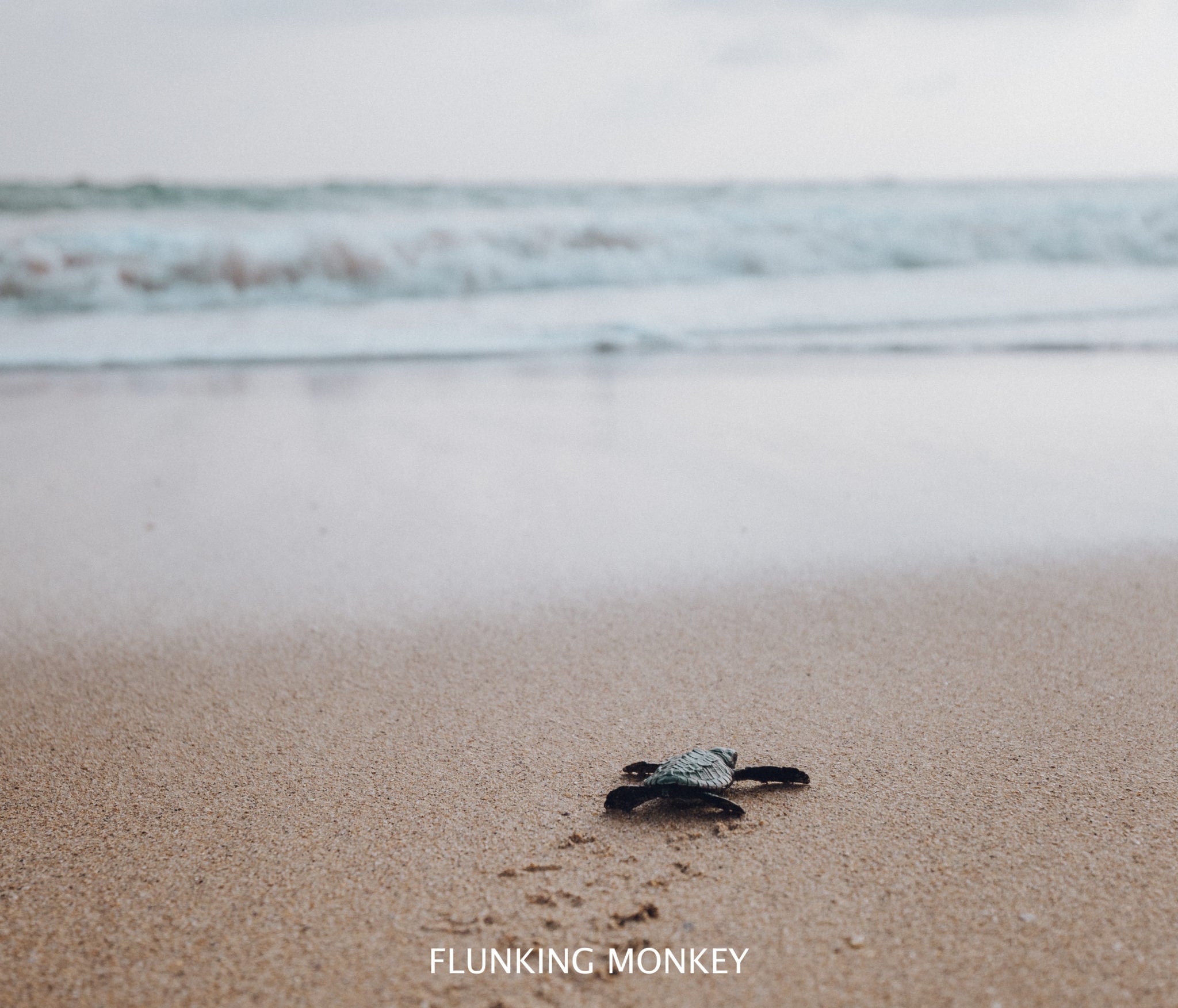 Be Aware Tuk Tuk drivers will attempt to take you to less ethical sites as they will work on a commission basis.

Sri Lanka is home to a wealth of natural resources and is rich in biodiversity. The country is a major producer of tea and the land required for tea plantations is substantial. Apart from the environmental implications deforestation in Sri Lanka has caused ill effects such as flooding, landslides and soil erosion from exposure of the deforested areas. It is also the primary threat to the survival of Sri Lanka’s biodiversity. Sri Lanka has 751 known species of amphibians, birds, mammals and reptiles of which 21.7 percent are endemic, and over 3314 species of vascular plants, of which 26.9 percent are endemic.

One of the main threats to the sustainability of Sri Lanka’s forests is government development policies in relation to the demand for timber and fuel and also the need to create plantations to raise revenue. Government policies are focused primarily on timber production and tree plantations. The Sri Lankan government working in conjunction with multi-national institutions have seen a major change in timber harvesting in Sri Lanka for the cause of sustainable development. Commercial plantations have gradually been brought under management system in Sri Lanka to produce wood in an economically efficient and sustainable way. 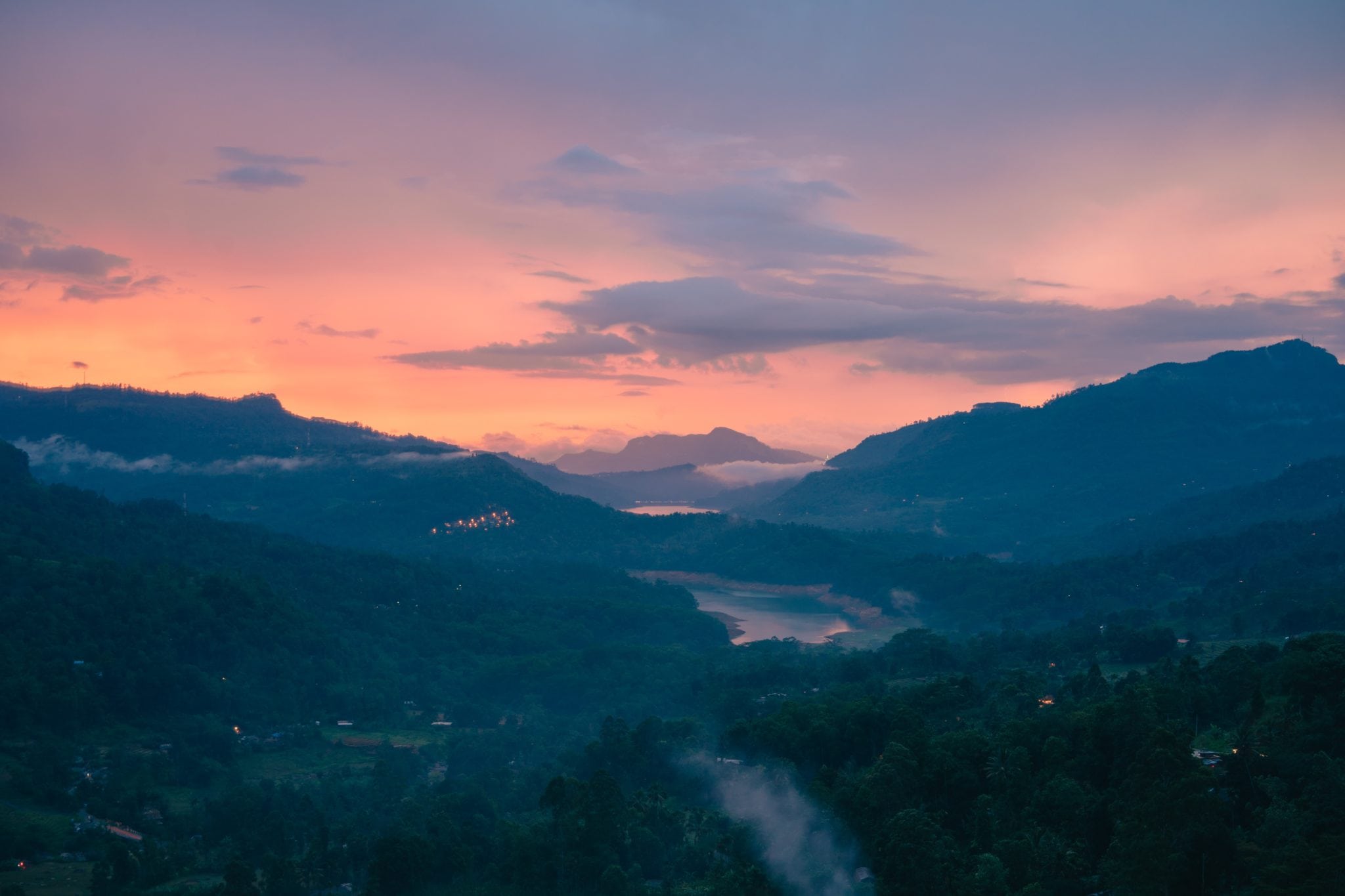 In Sri Lanka, The United Nations Development Programme (UNDP) have been working as a key development partner of choice in Sri Lanka since 1967, to achieve sustainable human development in economic, social and environmental fronts. Working closely with the Government at national, regional and local levels, and civil society and the private sector, UNDP aims at eradicating extreme poverty and reducing inequalities and exclusion to protect both people and the planet.

The Community Forestry Project funded by AusAid and in collaboration with the UNDP was initiated to reduce deforestation and forest degradation in the dry and intermediate zones of Sri Lanka.

At the heart of the programme is an awareness that the communities that live on the boundaries of the forest are in fact the best people to protect it. When empowered and equipped with knowledge of the ecosystem and best practices, technologies, market linkages, access to credit and ability to partner with the Government, the private sector, NGOs and other entities, such communities can prosper.

Field operations began in 2012, with the project being rolled out across 17 districts. 23,000 ha of forests were replanted in 167 sites and productivity was enhanced in over 3,000 home gardens.

The Countries Ban On Plastic

From the 1st Sept 2017, A New law banning the use and production of polythene came into effect in Sri Lanka. The government imposed the ban to restrict the indiscriminate use of polythene bags at groceries and retail outlets.

Accordingly, sale, importation and production of polythene grocery bags, lunch sheets and shopping bags and Rigifoam items were banned from 1st September under the new regulation. Also, the sale, importation and production of containers, plates, cups, and spoons made using polystyrene and polyethene containers used for processed or cooked meals will also come under the ban. Offenders will be subject to a fine of not more than Rs 10,000 and/or a jail sentence of not more than two years, the Central Environment Authority said.The Central Environment Authority encourages the Introduction and promotion of biologically degradable polythene and plastics and use of paper, cloth or reed bags for customers when purchasing items in stores. The Authority urged the private and public sector to join forces and assist efforts to minimize the use of plastic and polythene.The Sri Lankan government took the measure to ban or restrict the use of polythene to minimize the impact of disposing of such items on the environment.

What Hotels Are Doing

As Sri Lanka’s tourism has boomed their environmental impact has equally. Hotel chains such as The Jetwing hotel group are have already begun actively tackling these rising issues by: 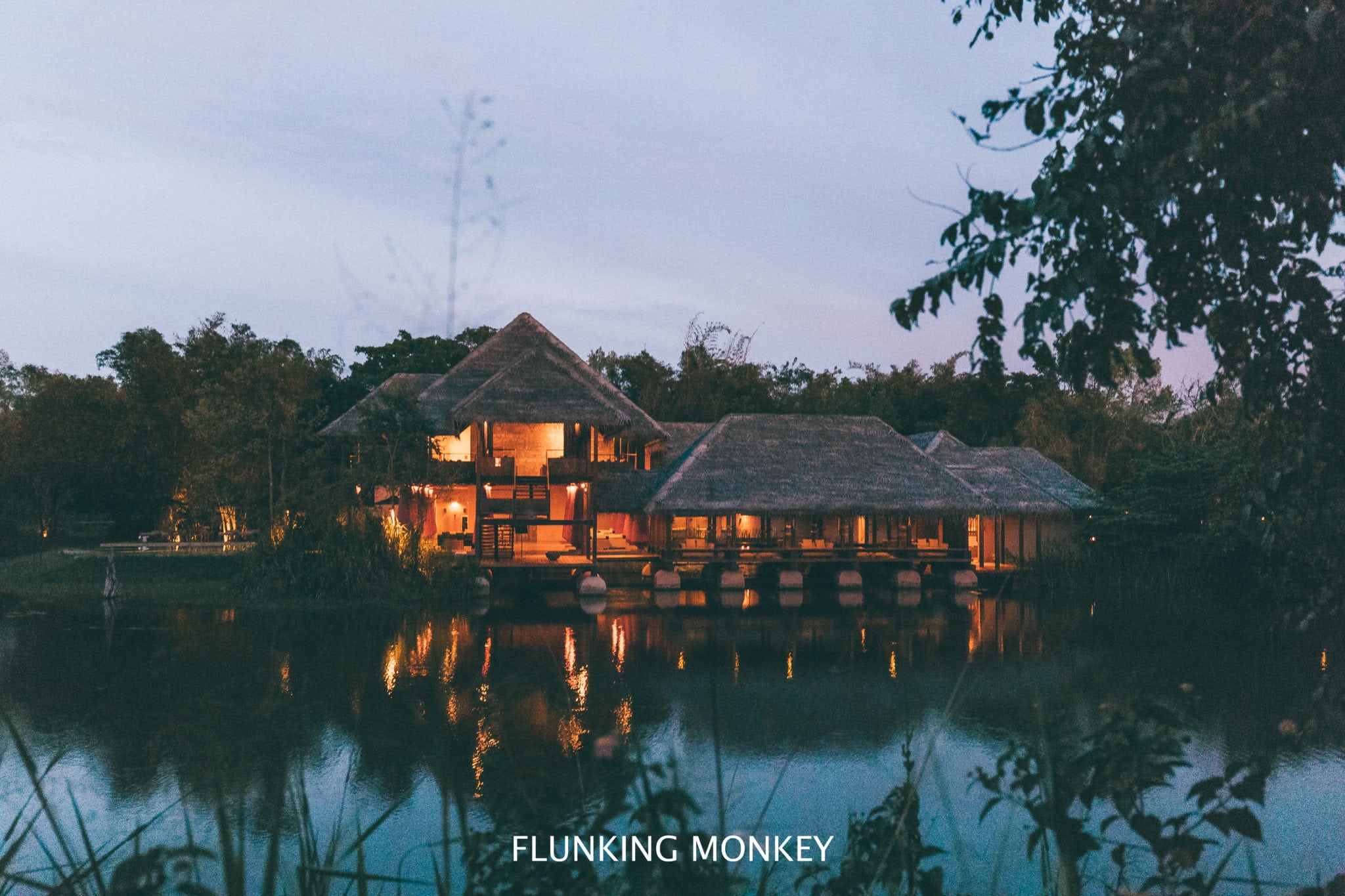 Jetwing Vil UyanaTransforming the barren land they built on into a thriving wetland – planting native trees and constructing waterways and lakes, and converting the abandoned land into the first luxury wetland resort in Sri Lanka. The newly created habitat has attracted many different species of animals including all three species of Sri Lanka’s small cats – the fishing cat, the rusty-spotted cat, and the jungle cat, – the slender loris, otters, and more than 130 species of birds, both resident and migratory. A Loris Information Center, the first of its kind in the island, and a Loris Conservation Site was set aside for the conservation of and education about the loris within the property, altering plans for further dwellings to be constructed in that land area.Jetwing St. Andrew’sHad a naturalist create and maintenance of a microhabitat on the commercially valuable land behind their property. This wetland was created, in part, to provide a safe haven for fauna threatened by extensive chemical use in surrounding agricultural farms, and to showcase the importance of microhabitats in an urban setting. The micro-wetland now hosts several species of endemic and extremely endangered frogs.Jetwing YalaThe beach-front at of this property has proven to be a safe nesting ground for sea turtles, with 4 of the 5 species recorded in Sri Lanka been observed laying eggs in the beach stretch. The naturalist at JW Yala carries out in-situ conservation for the nests, protecting them from pigs, dogs, and poachers and allowing the hatchlings an increased chance of survival.

Well, I hope you guys found this article interesting and insightful! Let me know below if you have any thoughts or questions!

Remember I’m running a TRAVEL GIVEAWAY open to all my Subscribers! 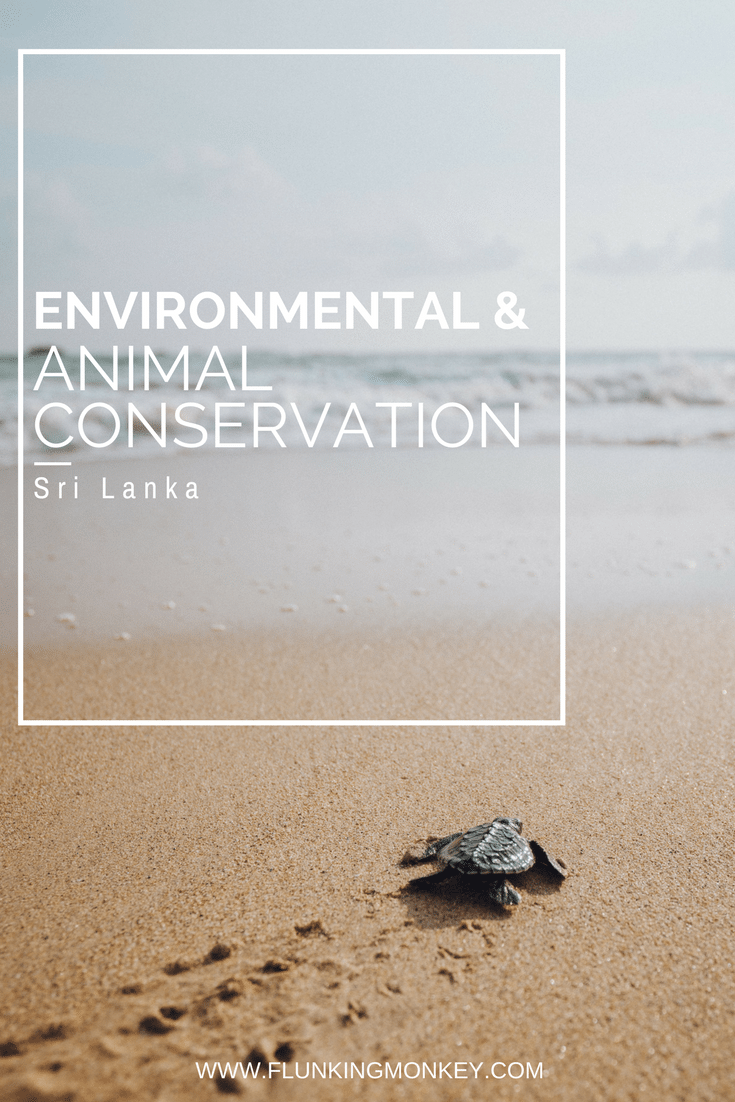