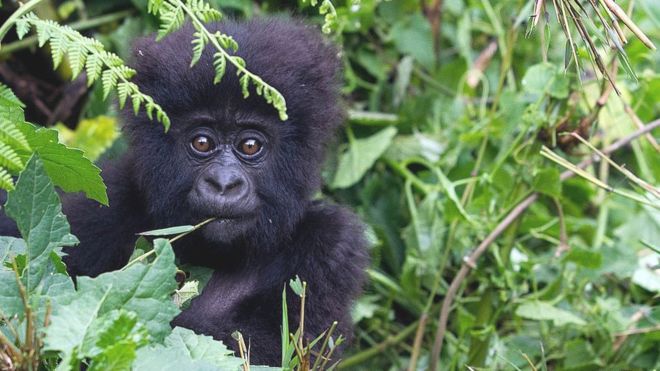 Conservation efforts appear to be paying off for some of the world’s most charismatic animals, according to new assessments for the extinction Red List.

Prospects look better for the mountain gorilla, after years of conservation measures, including anti-poaching and veterinary patrols and numbers of two large whales are recovering, following hunting bans.

The subspecies of gorilla, which is found in two areas in the Democratic Republic of Congo, Rwanda and Uganda, has moved from critically endangered to endangered on the IUCN Red List of Threatened Species. Anti-poaching patrols, removal of snares and work with communities who live around the protected areas where mountain gorillas are found have helped boost numbers from an estimated 600 in 2008 to more than 1,000 in 2018.

There is also good news for the fin whale, which has seen its status improve from endangered to the less severe category of “vulnerable” to extinction in the latest update of the Red List.

Its population has roughly doubled globally since the 1970s in the wake of international bans on commercial whaling in the north Pacific and the southern hemisphere since 1976 and reductions in catches in the Atlantic since 1990, the IUCN said. The western sub-population of the grey whale has also improved, moving from critically endangered to endangered.

Rothschild’s giraffe, now only found in small areas in Kenya and Uganda, has seen its status improve from vulnerable to near threatened as a ban on hunting, reintroductions and other conservation efforts helped boost populations.

The latest assessments by the International Union for Conservation of Nature – IUCN come as governments convene in Egypt for the Convention on Biological Diversity.

The to the Red List reveals that overfishing is causing declines in important fish species in parts of the developing world, with 13 per cent of the world’s grouper species and 9 per cent of Lake Malawi fish now threatened with extinction.

Other animals at risk

“These conservation successes are proof that the ambitious, collaborative efforts of governments, business and civil society could turn back the tide of species loss,” she said.

Almost 100,000 plants and animals have now been evaluated for extinction threats by the IUCN. Of these, around a quarter are on the edge of extinction.

There were around 600 mountain gorillas left in the wild in 2008; but numbers have now risen to over 1,000 after intensive conservation efforts. These include anti-poaching patrols and vets trained to give care to gorillas in the wild.

The gorilla, protected to areas in the Democratic Republic of the Congo, Rwanda and Uganda. Threats remain, including poaching, civil unrest and diseases passed on by humans.

But while mountain gorillas are increasing in number, the great ape remains endangered.

“Coordinated efforts through a regional action plan and fully implementing IUCN Best Practice guidelines for great ape tourism and disease prevention, which recommend limiting numbers of tourists and preventing any close contact with humans, are critical to ensuring a future for the mountain gorilla,” she said.

Populations of this large whale – one of the biggest in the ocean – are on the rise, and have roughly doubled since the 1970s. There are now estimated to be 100,000 adults.

This whale too is reaping the benefits of bans on commercial whaling. Numbers are starting to rise, albeit more slowly. However, this success could be derailed by threats from oil and gas development and commercial fisheries.

However, other flora and fauna is declining.

Illegal logging is threatening the survival of the Vene tree, a globally important timber tree which is found in west and central Africa and which is now listed as endangered as booming demand for its wood drives felling.

The Titan arum from Sumatra, nicknamed the corpse flower for its stench, has been assessed for the first time and is listed as endangered.

It has seen an estimated population decline of 50 per cent in 150 years due to logging and conversion of forest to palm oil plantations.

Nicknamed the corpse flower, one of the world’s largest and smelliest flowers has been assessed for the first time. It is found in the wild only on the island of Sumatra, Indonesia. Only about 1,000 plants remain in the wild. It is under threat from logging and the clearing of forest for oil palm plantations.

Illegal logging is threatening the survival of this globally important timber tree, found in West and Central Africa.

Fifty-four fish species from two important fisheries are threatened by unsustainable fishing. They include Malawi’s most economically valuable fish, the , and more than 100 types of grouper, a fish found widely around the world.

The Above is sourced material from The BBC  & The Scotsman