Postcards from the French Riviera 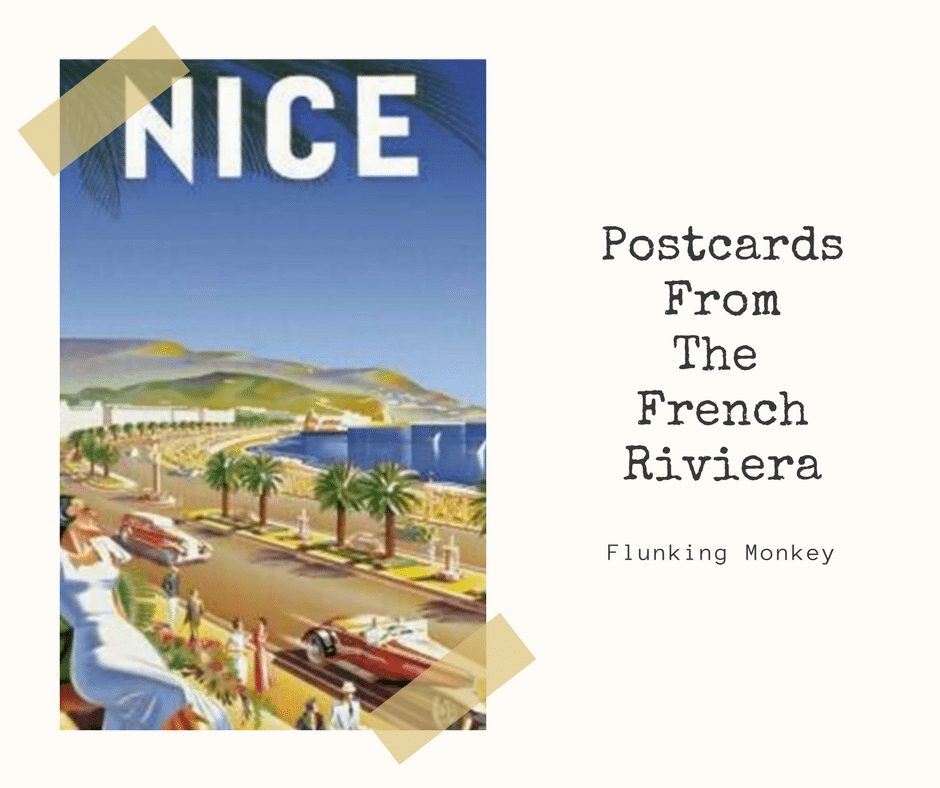 I had always wanted to experience the french riviera. Years of hearing about their warm weather, blue waters and luxe lifestyle had definitely pushed this destination up my bucket list.

When it comes to travel I always end up travelling in a shoulder season. I’m not entirely sure whether I do this or purpose or not but I find it always works in my favour. There are always fewer tourists and sometimes you can notice price drops in some stores, although price drops also tend to be accompanied by drops in the weather. I have to say though that having 20-degree weather in October is still great to me!

When it comes to accommodation on my trips I tend to just book what I’m feeling at the time or most commonly what fits within my price range for that particular trip. On this occasion, I wasn’t just looking for myself, both I and my friend Luke were checking out the french riviera for the first time.

Hotel Ozz worked out perfectly for us! A mix between a hotel and hostel it had the perfect balance for what we were looking for on this trip. 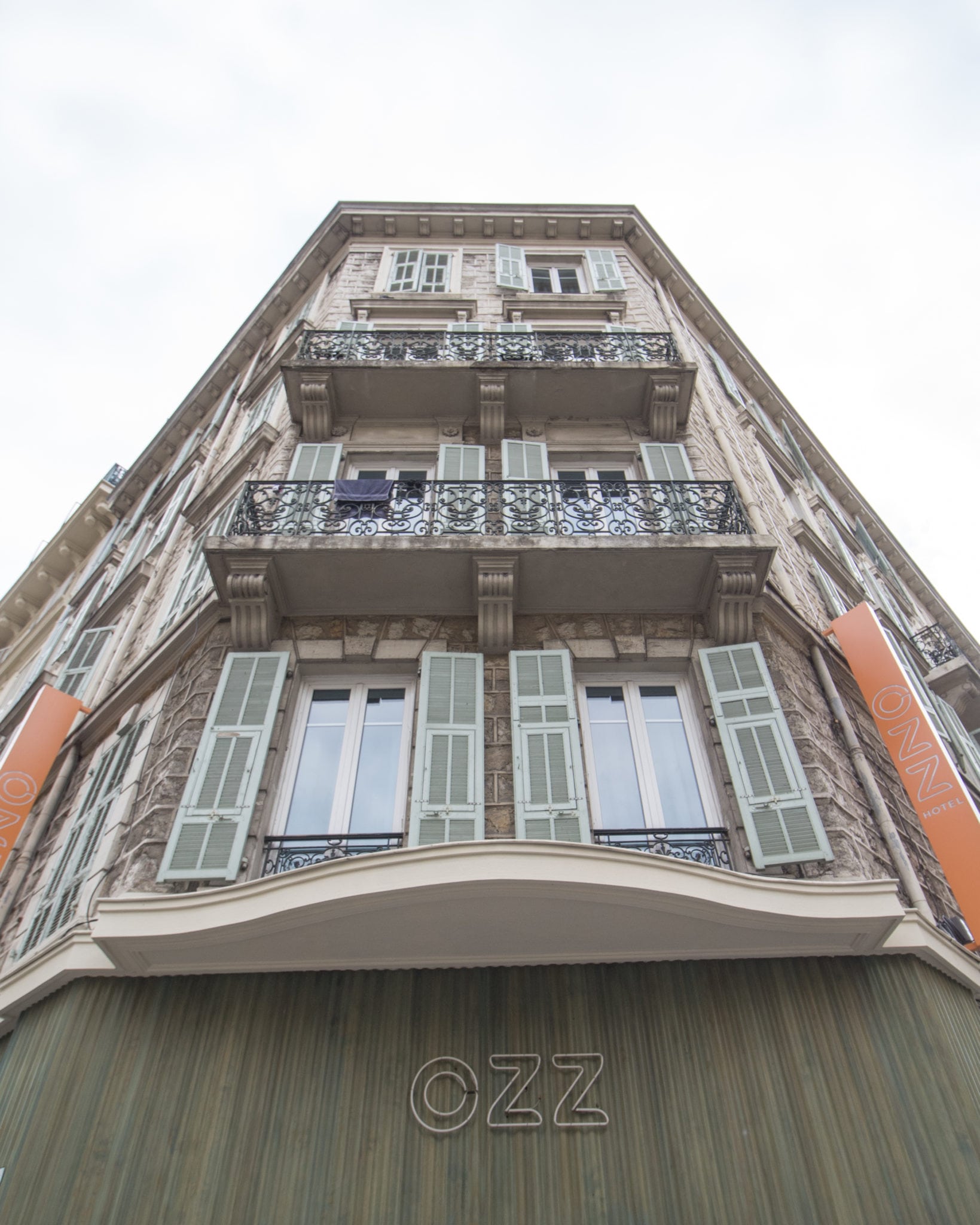 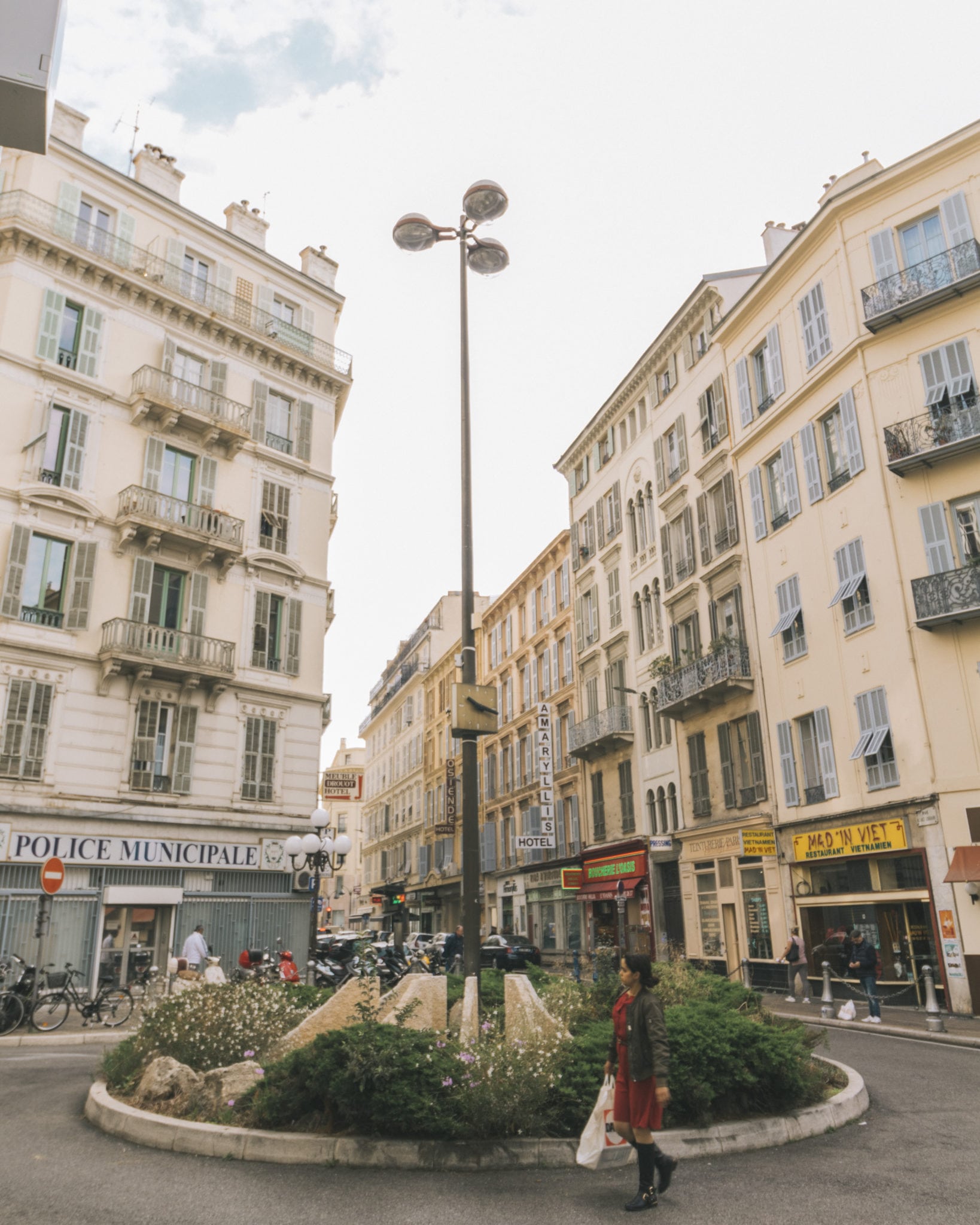 We were lucky enough to have a rooftop room, which I would definitely recommend to any guest intending to stay at this hotel. The windows gave you the best vantage point into the city whilst the private balcony lets you relax whilst amongst the locals. Unfortunately, I was unable to take a picture of our room as we arrived quite late a night and had already spread out our belongings by morning but you can view the huge array of rooms available to you at Hotel Ozz. 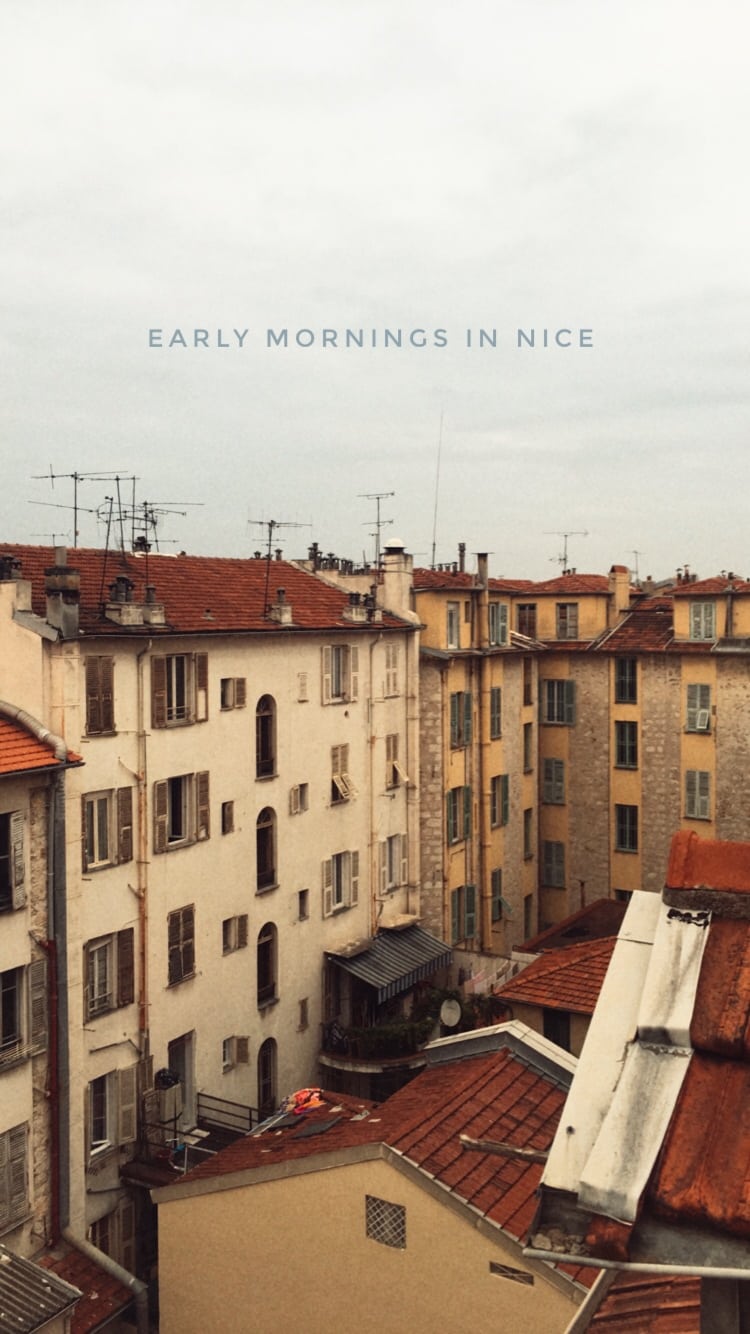 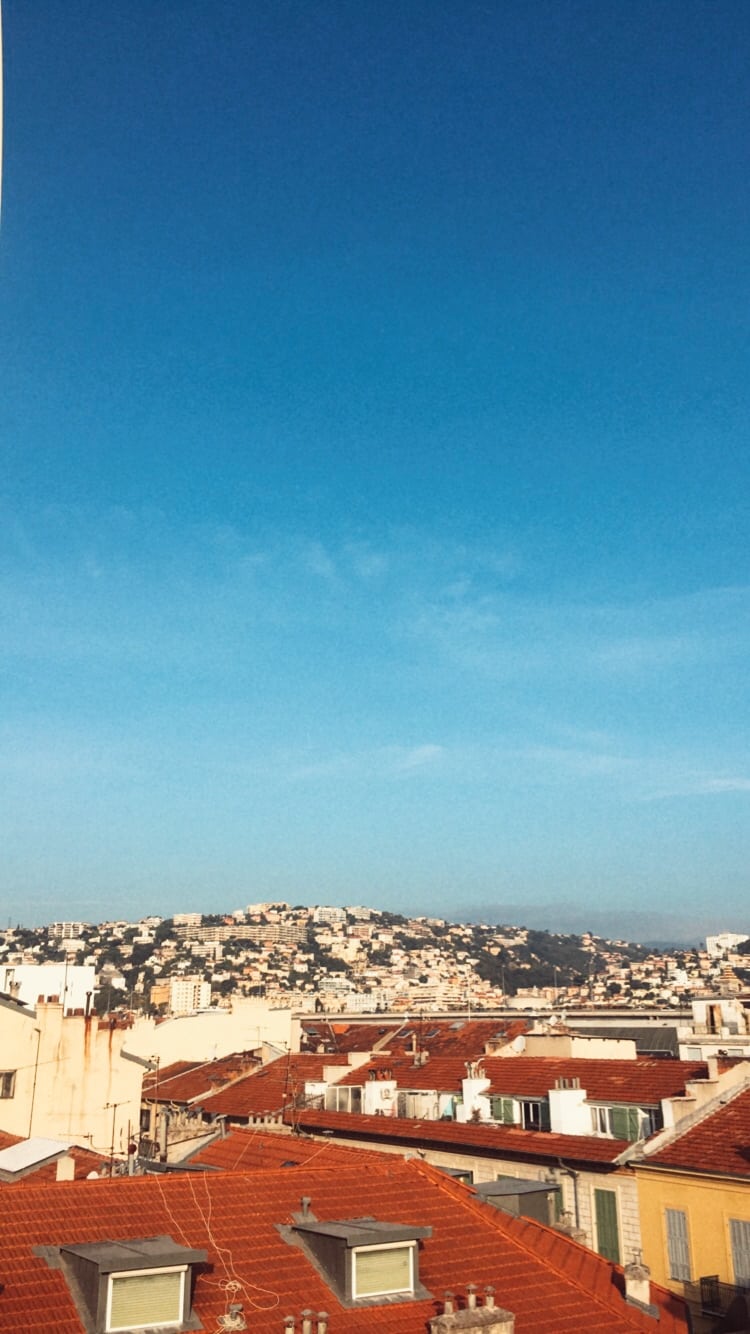 Their classic French style breakfast helped us kick the day off right, with a croissant and baguette accompanied with spreads and morning coffee. A factor we really appreciated was their centralised location in Nice, everywhere we wanted to go was within walking distance! 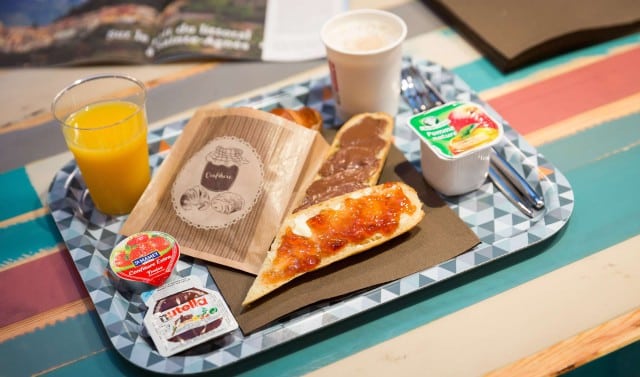 The Town and Sea – French Riviera

One of the great appeals of the French Riviera was its blue waters! This was something I could not wait to see for myself and at less than 15 minutes walk away this was one of the first places we headed. I always appreciate walking a lot more when I’m travelling as it gives you the opportunity to see so many more sights and come across interesting nooks than when travelling by car.

So I’m sure you guys are aware there is a Notre Dame In Paris , did you know there is also one in Nice? Well, personally I had no clue until I randomly stumbled across it on our walk toward the coast. Not only was it beautiful from the front and the back, there were significantly fewer tourists here. 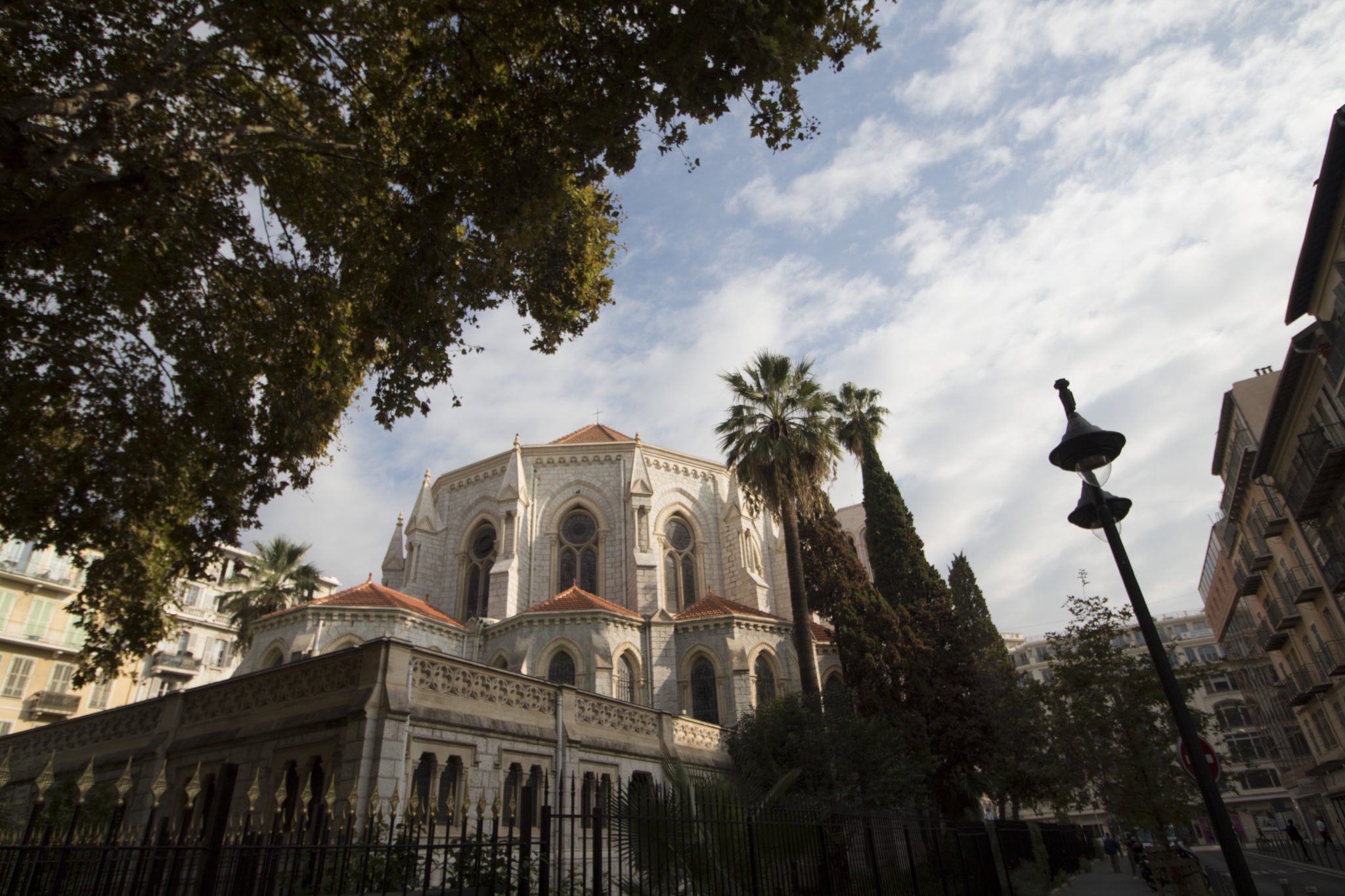 Even though visiting in October with the days not as warm and sunny as when in the peak of summer the sea was still glowing blue. One thing I really enjoyed were the little things I didn’t expect such as the beach being a pebble beach and not a sandy one. Usually, I’m not a huge fan of pebble beaches as I like the feeling of sand between my toes, but I know this isn’t the case for everyone. The sound of a pebble beach might make Nice seem even more appealing to you.

One thing that we wanted to experience but didn’t get the opportunity too was the fact you can go cliff diving right under the “I Love Nice” sign. Although it sounds like a really fun a great idea I would try and aim to go when the waves aren’t as rough because you can easily be slammed into the jagged cliffs. Which brings me onto my last point.

I was stunned by the varying coastline Nice has! From the pebbled beach to the cliffs and back to the marina I don’t think there was one point where I thought I’m bored with what I’m looking at. 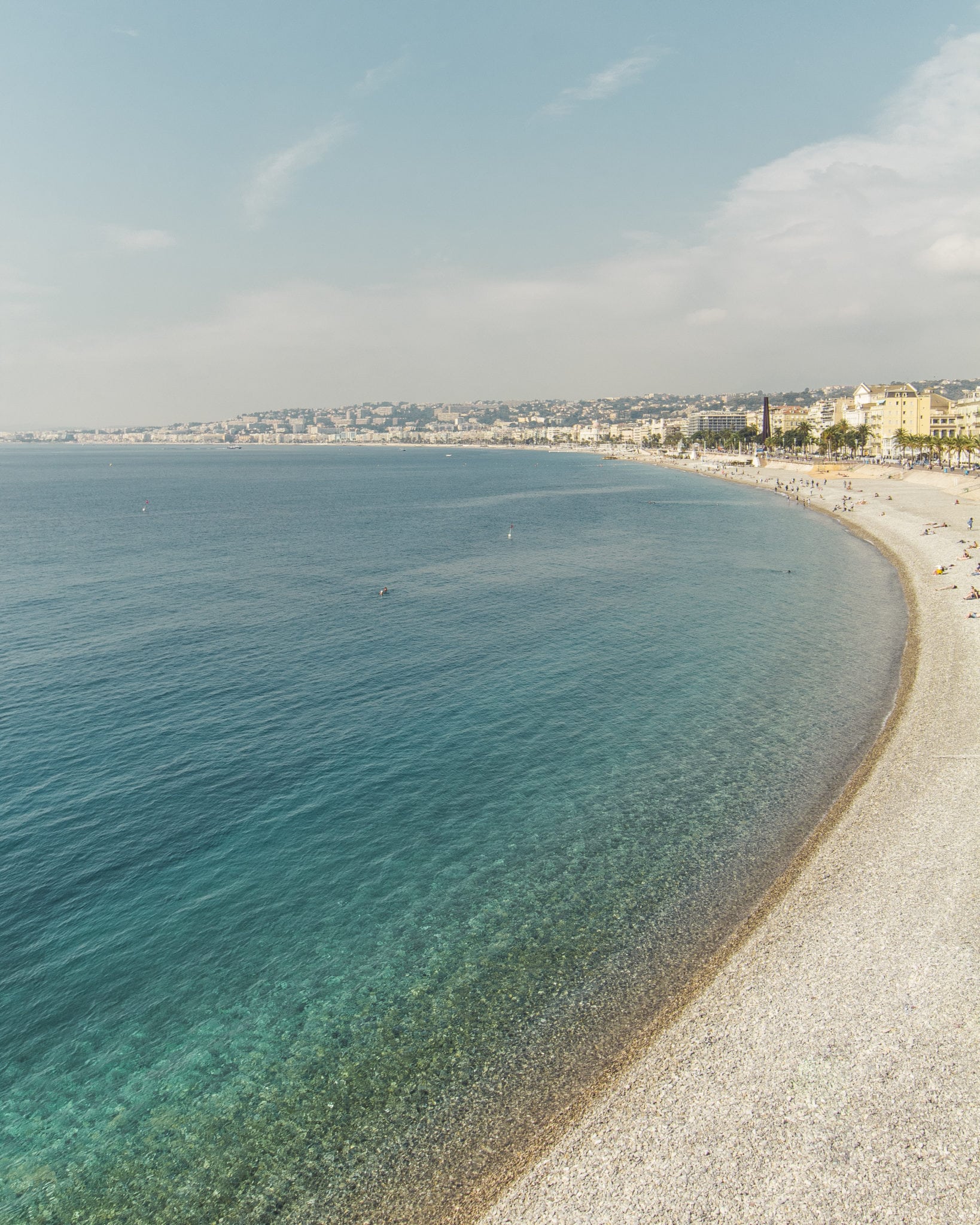 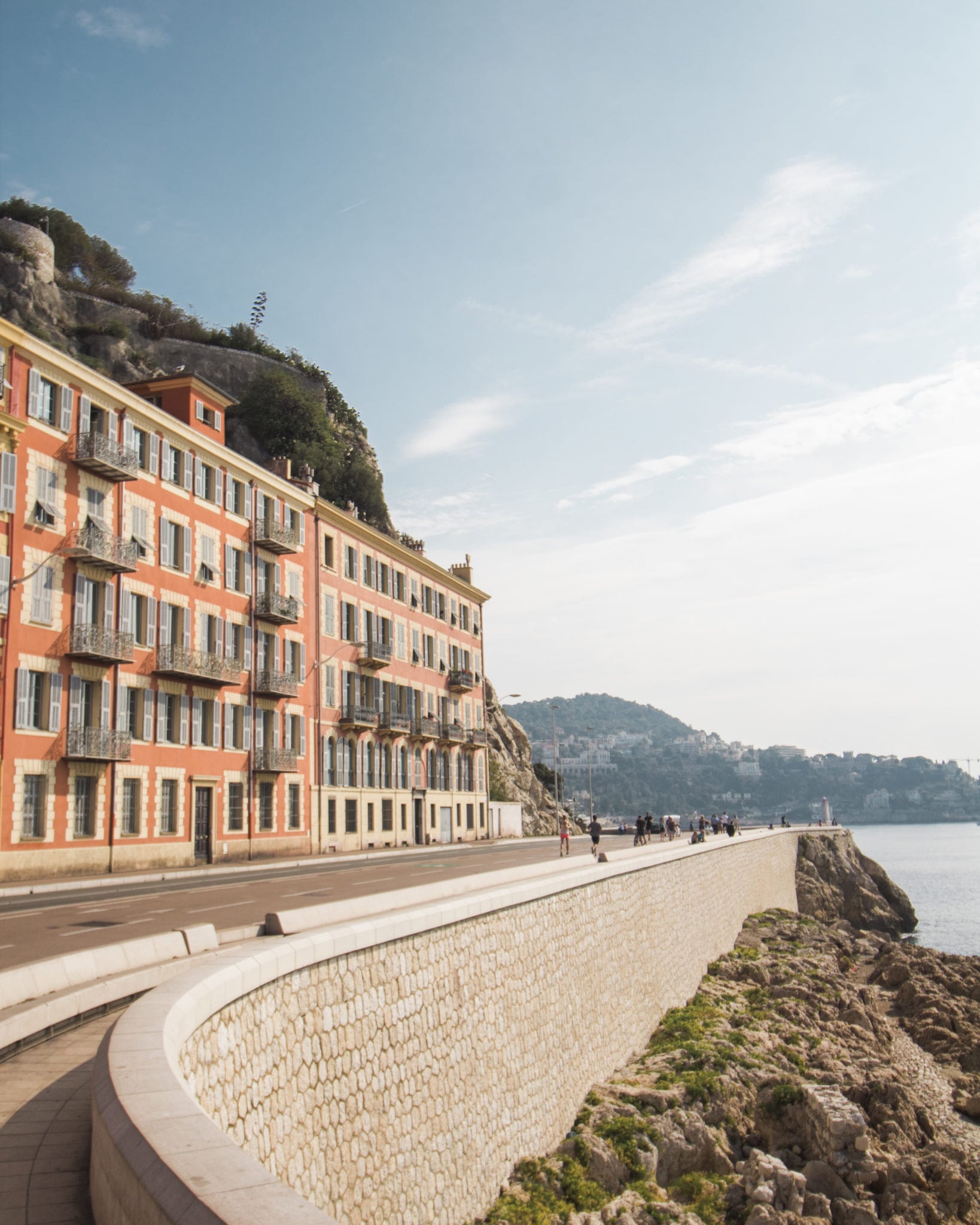 The Place To Eat – French Riviera

When it came to finding French food in the french riviera, we did slightly struggle. Although we did accidentally get to try some local cuisine in the form of caramelised onions on a pizza like dough… I forgot what the term for this is! So if you’re French and reading this and have any idea about what this is called please let me know! So the restaurant we happened to come across this in was called La shounga, just a stone’s throw around the corner of the monument de morts.

Oddly enough we heard the best restaurant to eat at was a place called La pizza. Now before I get into what this place was like, I think the story of how we found this out is much more interesting. In the many Uber rides, we took whilst in Nice, I would definitely say this was my most memorable. In London most Ubers tend to be cars that aren’t particularly that expensive, however, in Nice every uber we took was either a really nice Audi or Mercedes.

On this particular occasion, we were picked up by a driver with a Mercedes E class. After the general fumble of trying to speak French to him, we realised he was fluent in English. Now here is where the story gets interesting, not only does he speak English very well he actually runs his own taxi business alongside being Charlize Theron’s personal driver when she is in France! Obviously gobsmacked as we were, long story short we all know Mariah Carey is crazy.

Anyway back to this restaurant, so this driver recommend la pizza to us. We were a bit sceptical, wanting to eat French food as we were in France but he was adamant this was the best place that locals eat. He wasn’t wrong, arriving at La Pizza this place was packed full of locals and on top of that served some great Pizza and Pasta! 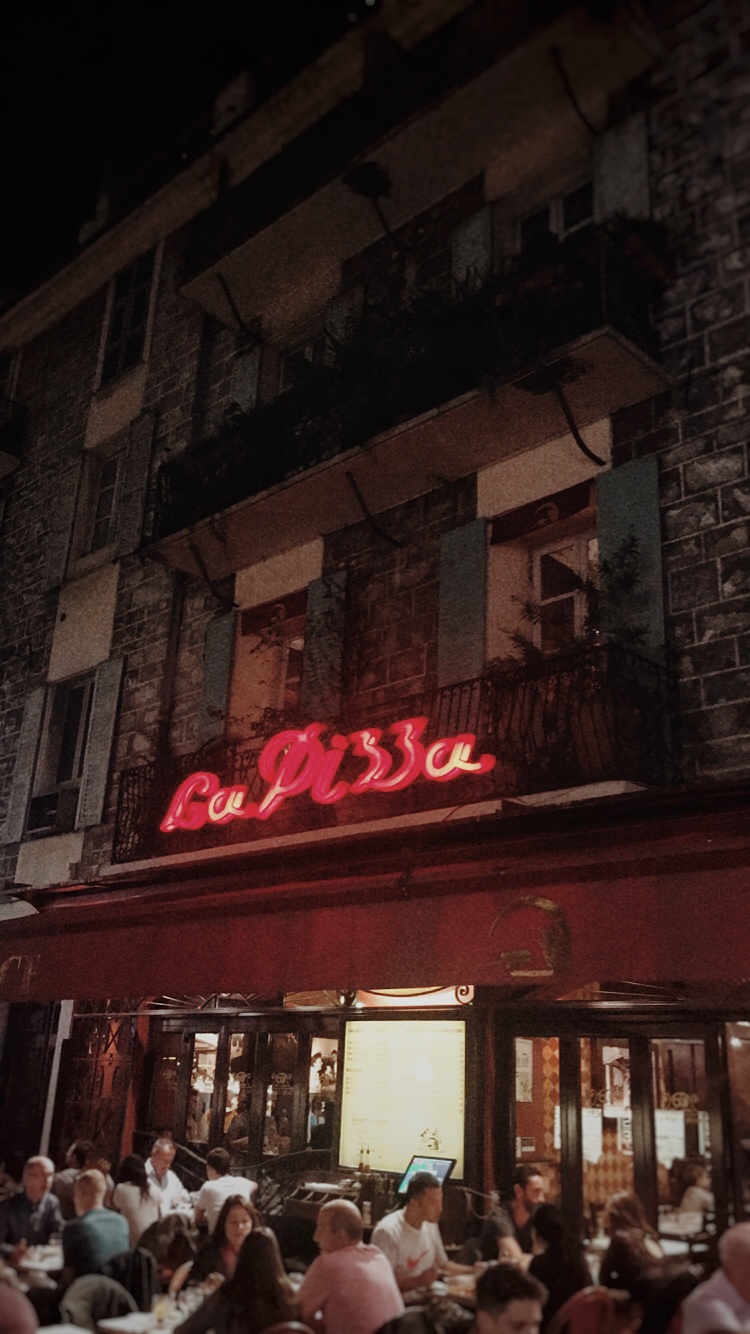 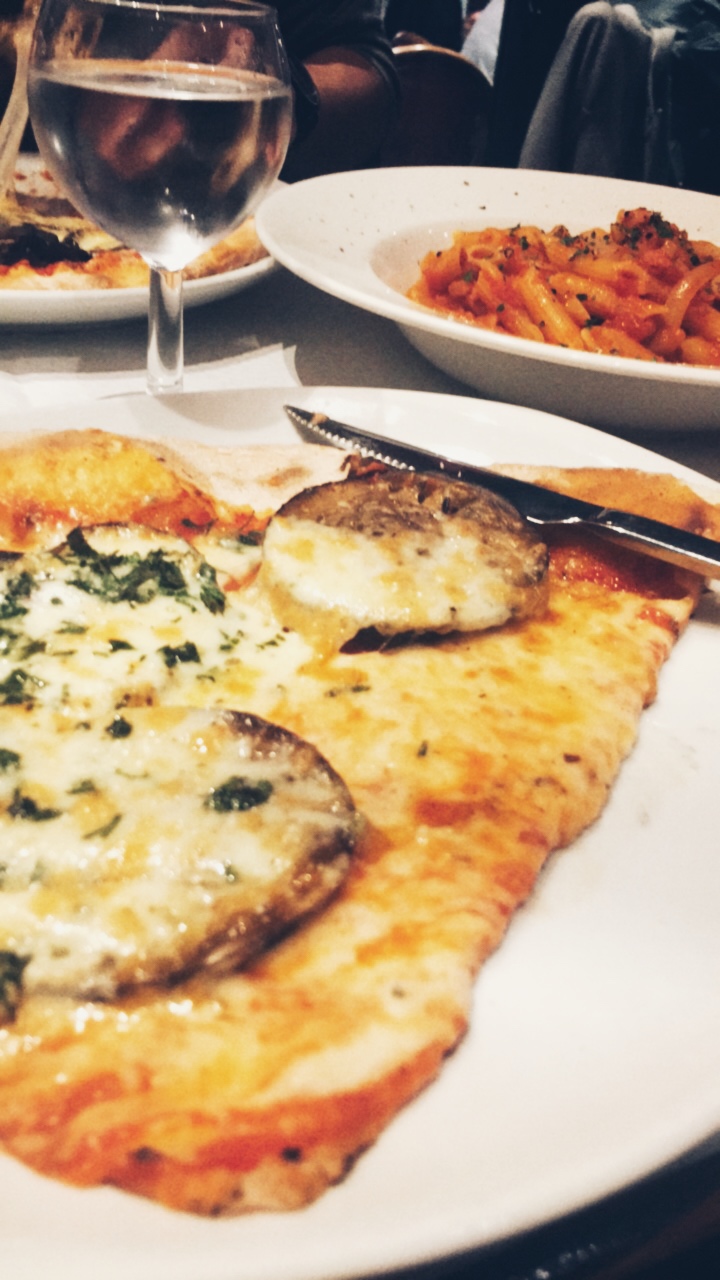 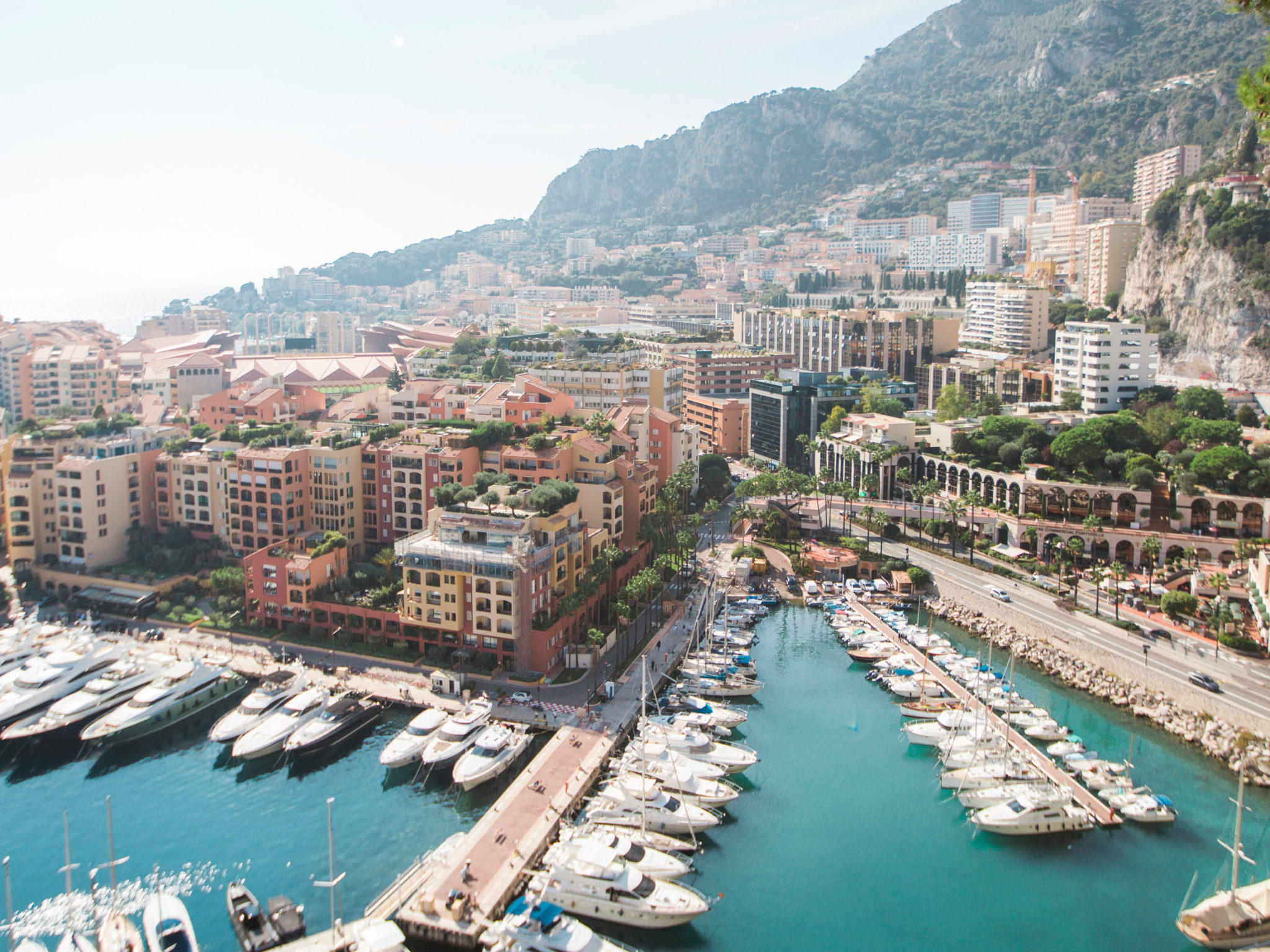 I think I appreciate and enjoy those spur of the moment trips, those that you make the split decision the day before. I say that because that’s how we ended up in Monaco. A place I’ve probably dreamt about seeing ever since I watched the old James Bond movies as a youngster.

What I didn’t know is that you can get a train ticket to Monaco from Nice for only €3.50 One Way or €7.00 Return, you don’t even need your passport for the train which shocked me more! Getting to Monaco by train was really easy, especially from Hotel Ozz. Gare De Nice Ville has trains going to Monaco every 20/30 mins. A good idea is just to head to the station grab your tickets, then just chill a bit in the cafes they have outside, we used this opportunity to grab some macarons. In case you have a struggle finding the ticket counter, turn right upon entry walk down the hall slightly and then turn left at the ticket booth.

Depending on what sort of views you’re after, sit on the right side of the carriage for coastal and the left side for countryside and houses. As much as I would have enjoyed coastal I did not regret sitting on the left side at all! The views were just as beautiful.

Monaco is known for is high life, I did often think this might have been an over exaggeration but I was obviously wrong. within minutes of arriving, I saw what was probably a continuous stream of 5 supercars driving behind one another. I definitely knew by then I had arrived in Monaco.

Walking around the small city centre, it actually didn’t scream money. It seemed much more like a small town, you could see locals going about their daily lives. Albeit there were some people dressed very well so you could always tell there was a certain air about the place. Overall it seemed beautifully quaint.

Something I was really shocked to realise was how beautiful the Monaco landscape is. Whilst walking around the town we stumbled across a pathway that leads to the Monaco Palace. This was unlike any palace I had ever seen before, with views in the background of mountains resembling Yosemite. The palace walls were built like a 17th Century castle looking out onto the Monaco marina, it honestly felt like you were walking through a dream… or a film set. 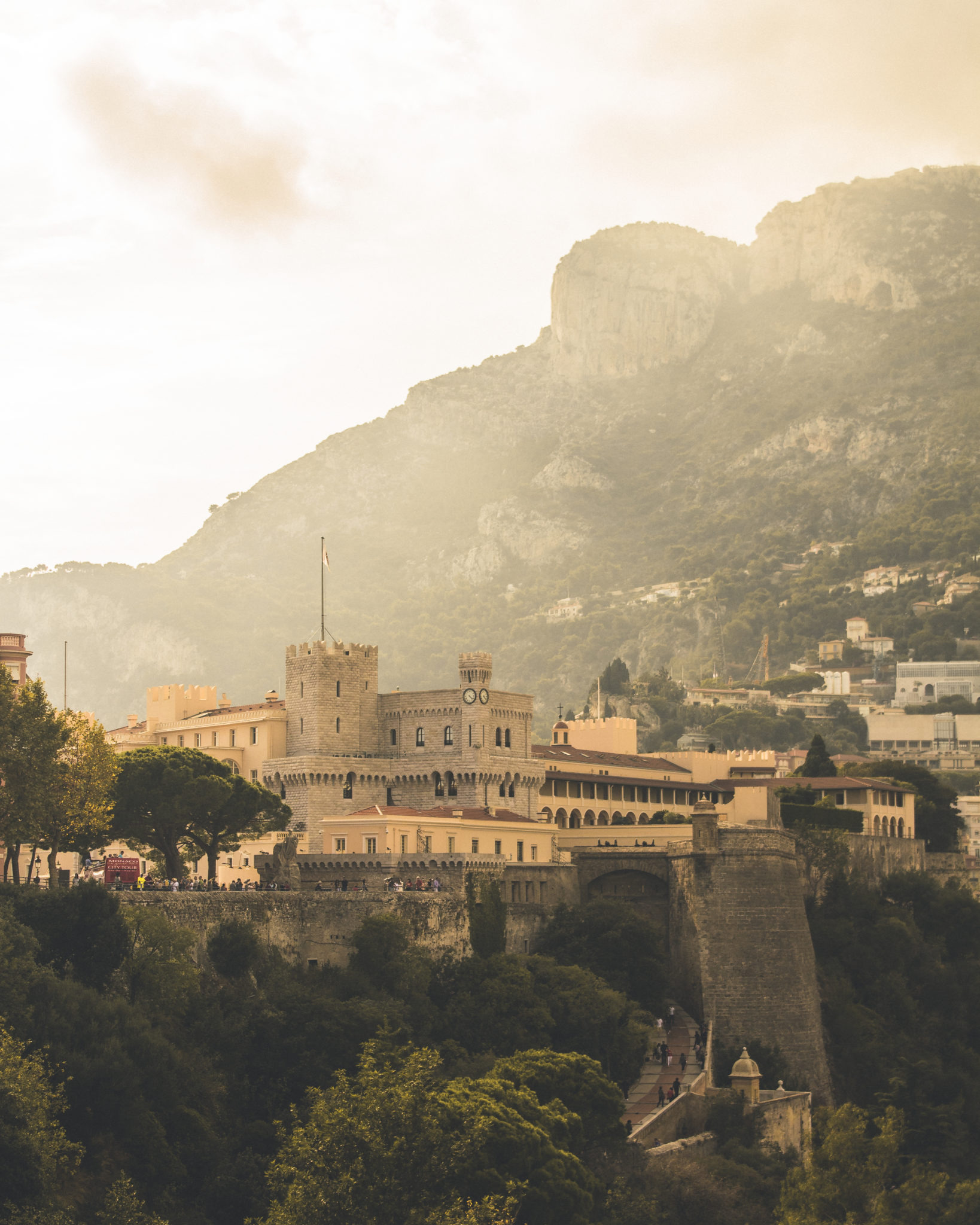 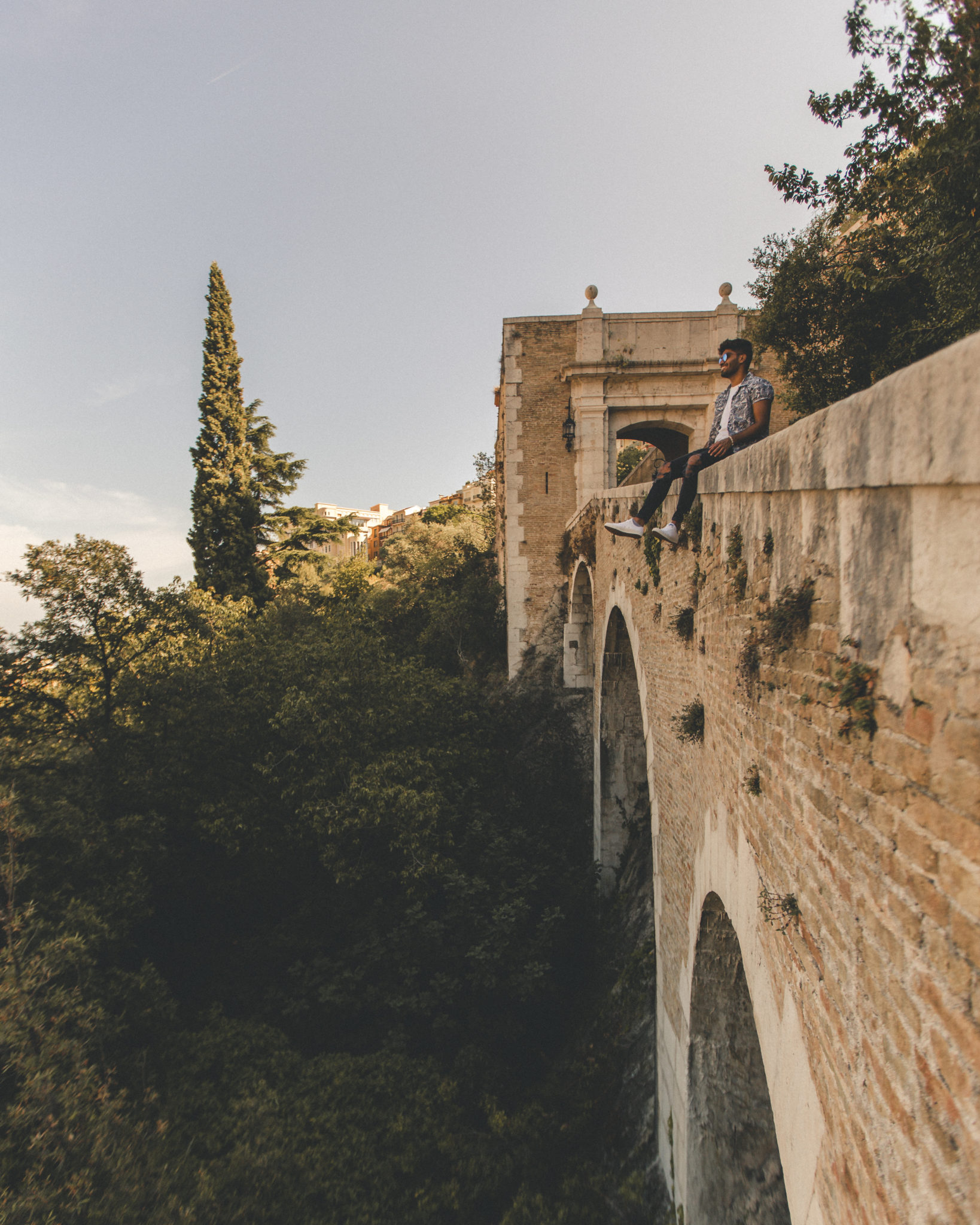 As much as I would have loved to stay longer in Monaco my Euro Trip was just beginning. I had gotten a taste and wanted more! I had to make a promise to myself to return one day…maybe with more money haha.

Even if all you have is a day in Monaco I would definitely recommend walking around as much of the small country as you can, people are kind and the views are beautiful. You never know maybe you can persuade someone to let you join them on their yacht!

Did someone say Helicopter?

Monaco literally must have been a dream. Not only was it photographic heaven, I got to fulfil another lifelong dream of mine there and ride in a helicopter! I mean what an amazing experience. I would never in my wildest dreams thought my first ever helicopter ride would have been flying me back from Monaco to Nice! 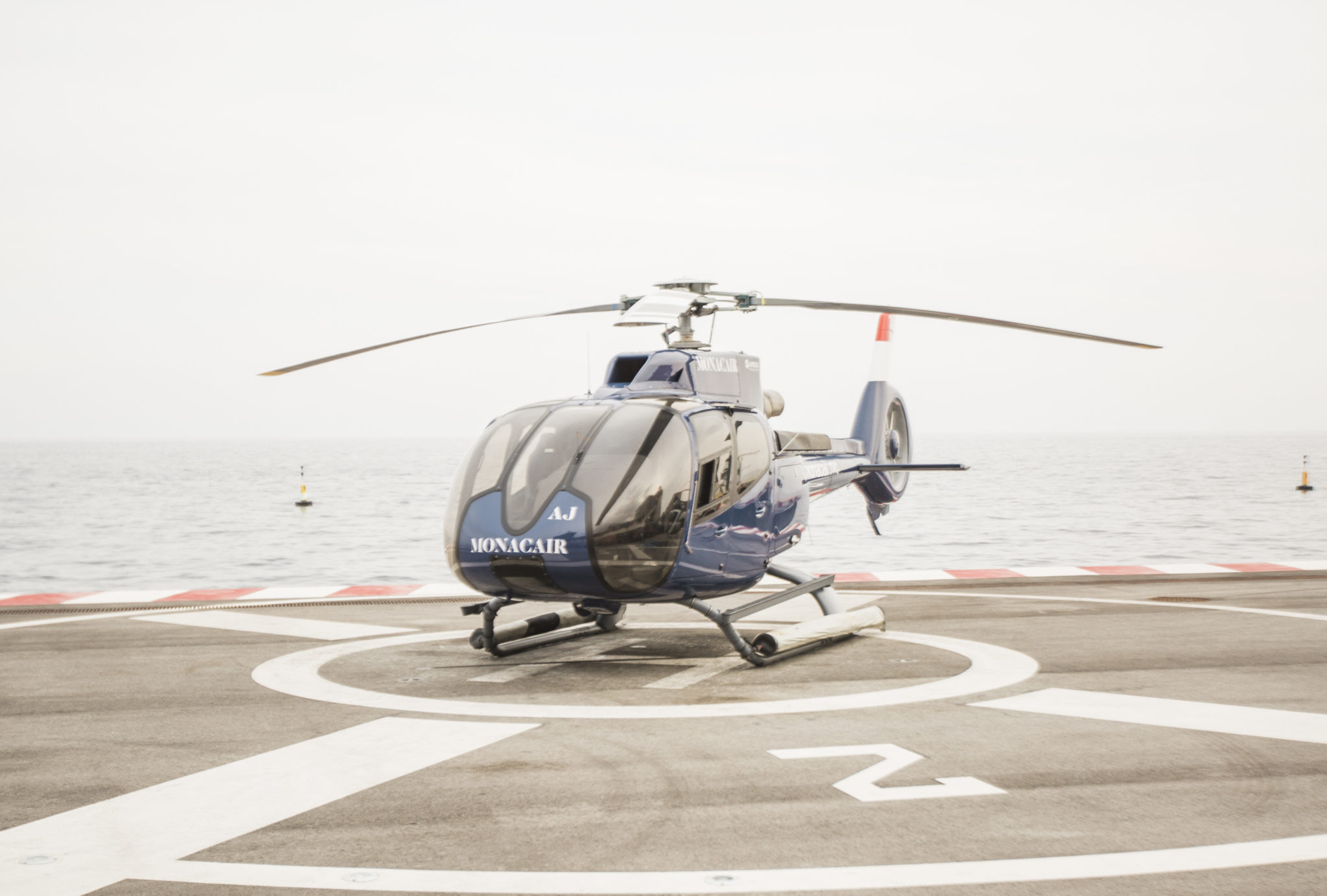 I didn’t even know this was a thing people do, I mean you can do it too! The amazing company Monacair offer commercial flights to and from Nice and Monaco. Their staff are super friendly and helpful and honestly, the 10-minute journey was probably some of the best minutes in my life. This is definitely an experience I would recommend and I will probably do again! (Oh head’s up though, if you intend on getting a helipcopter ride, you will need your Passport!) 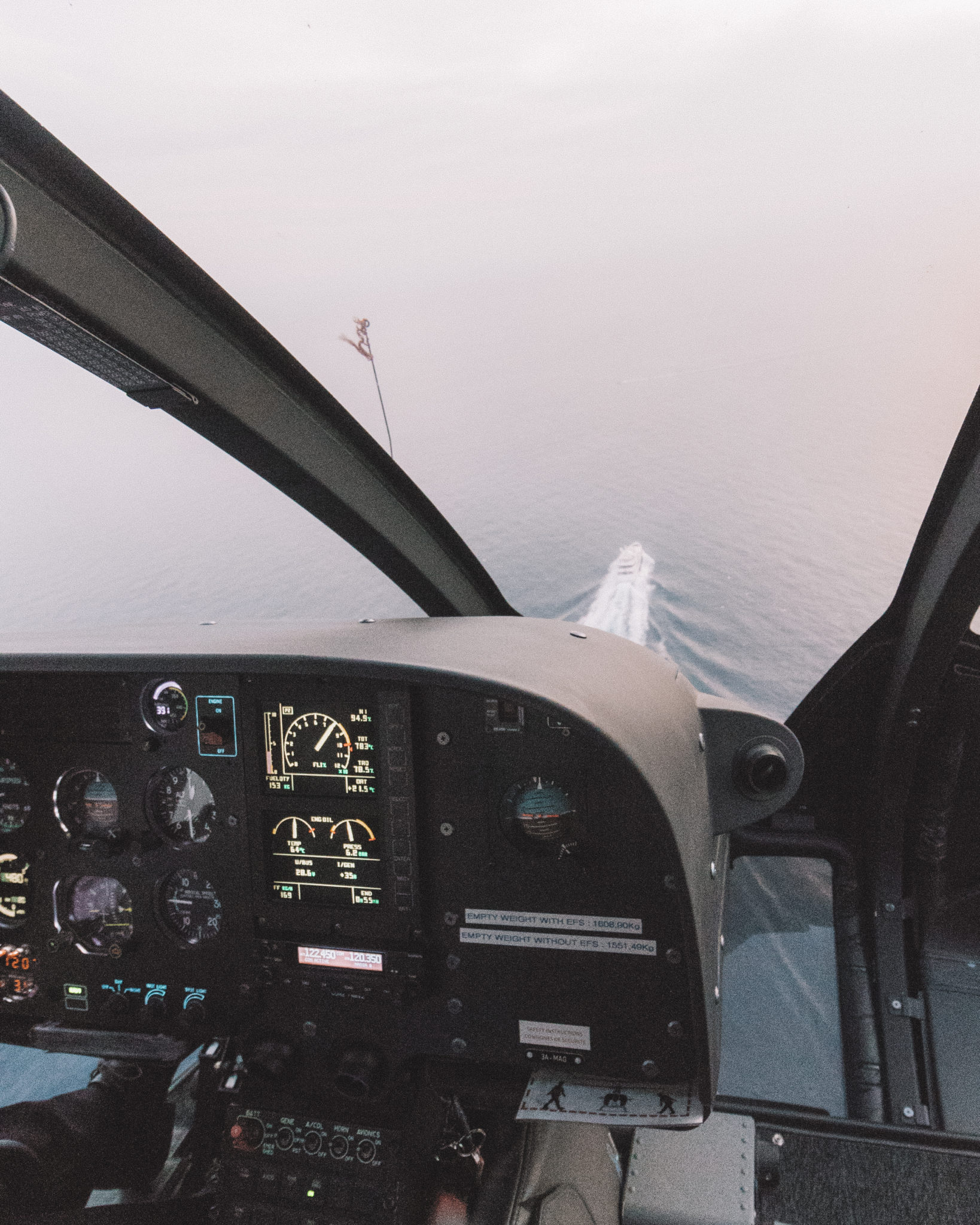 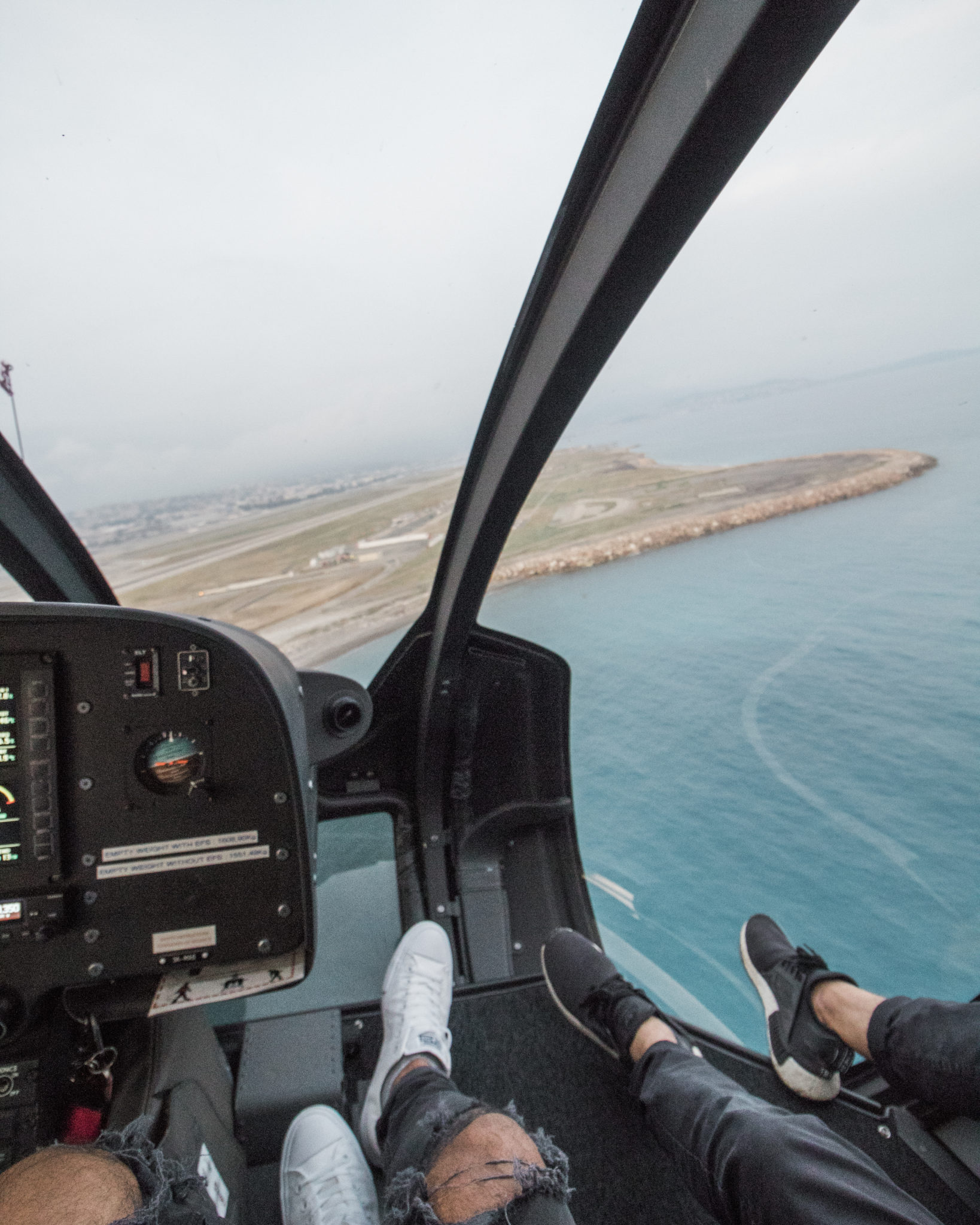 Well, I hope you guys found this guide article interesting and insightful!
Let me know below if you have any questions!

Remember I’m running a TRAVEL FOR FREE GIVEAWAY open to all my Subscribers! Click Here to get more details! 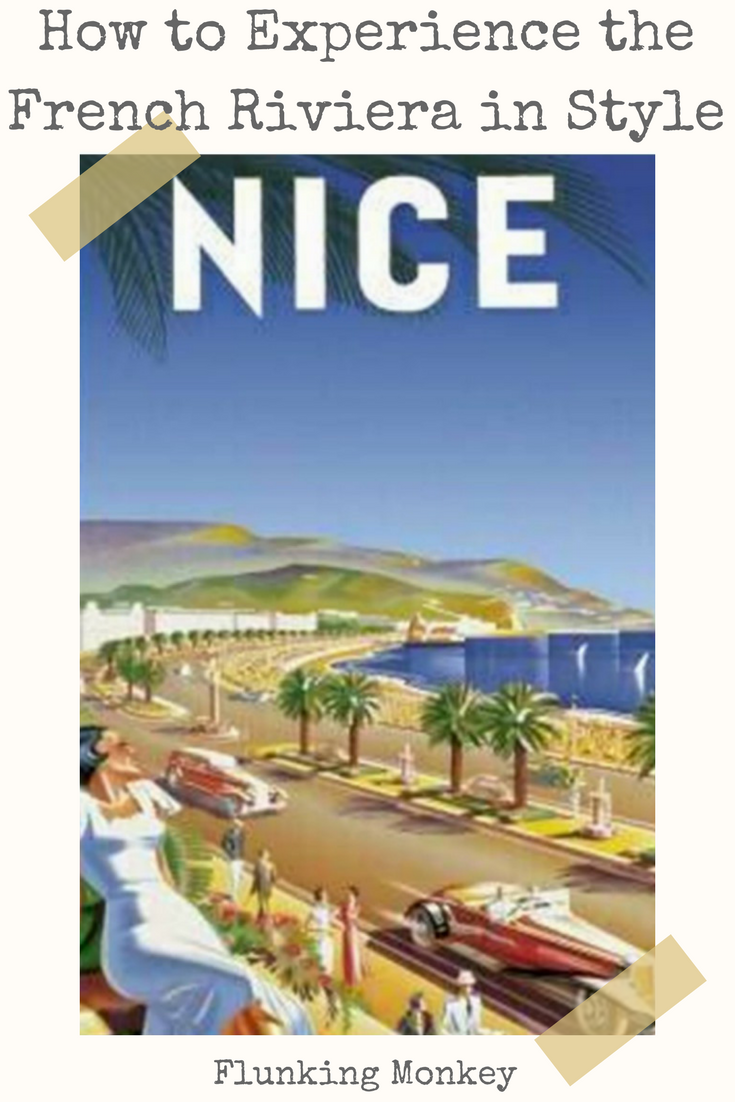