Air New Zealand – Flying With Airline Of The Year 2018 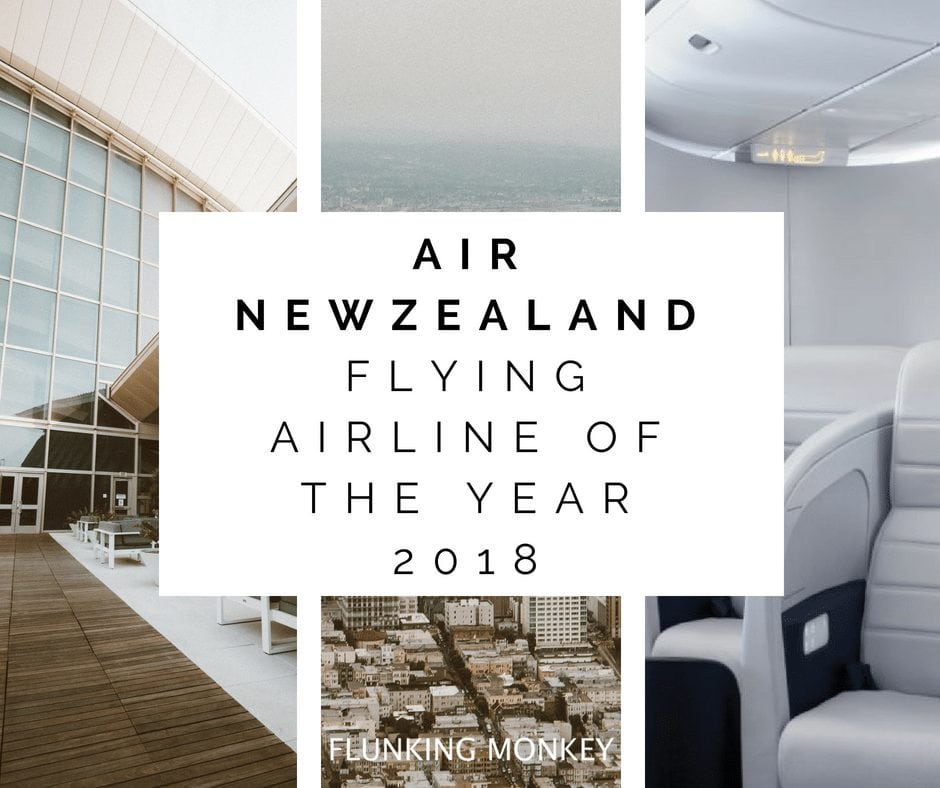 Travelling long distance can always seem like such a long and uncomfortable hassle. From sitting around at the airport, waiting in line to queue for your seat to having no room to stretch for nearly 12 hours. Recently I had the privilege of flying with Air New Zealand, who was just crowned airline of the year for the fifth year in a row. Experiencing their royal service on their London Heathrow to Los Angeles route, as I embarked on my Ultimate Northern California Adventure.

If you’re looking to fly with Air New Zealand please make sure to offset the carbon released from your flight. Per person the average person emits 1.5 tonnes of CO2 per return on a transatlantic flight. You can do this directly by clicking here.

The check-in process at London Heathrow Terminal 4 was very smooth, even with what seemed like not many check-in desks we arrived within 3 hours of our flight departing and walked straight up to check-in with no queueing times to be greeted by friendly and smiling staff.

The Lounge at LHR – Singapore Airlines

With Air New Zealand being a star alliance partner we got access to the Singapore airlines lounge at London Heathrow Terminal 4. Located in a hidden corner of the airport we only went up two levels in an elevator to arrive in the golden toned contemporary lounge that made us feel like our journey had already begun.

Again after being greeted by friendly staff we were shown into the lounge, boasting a large buffet with a variety of food from breakfast to dinner along with self-serve coffee and juices with our very own private open bar.

You could see no expense was spared when it came to the lounge and gave us the most comfortable start to our journey. 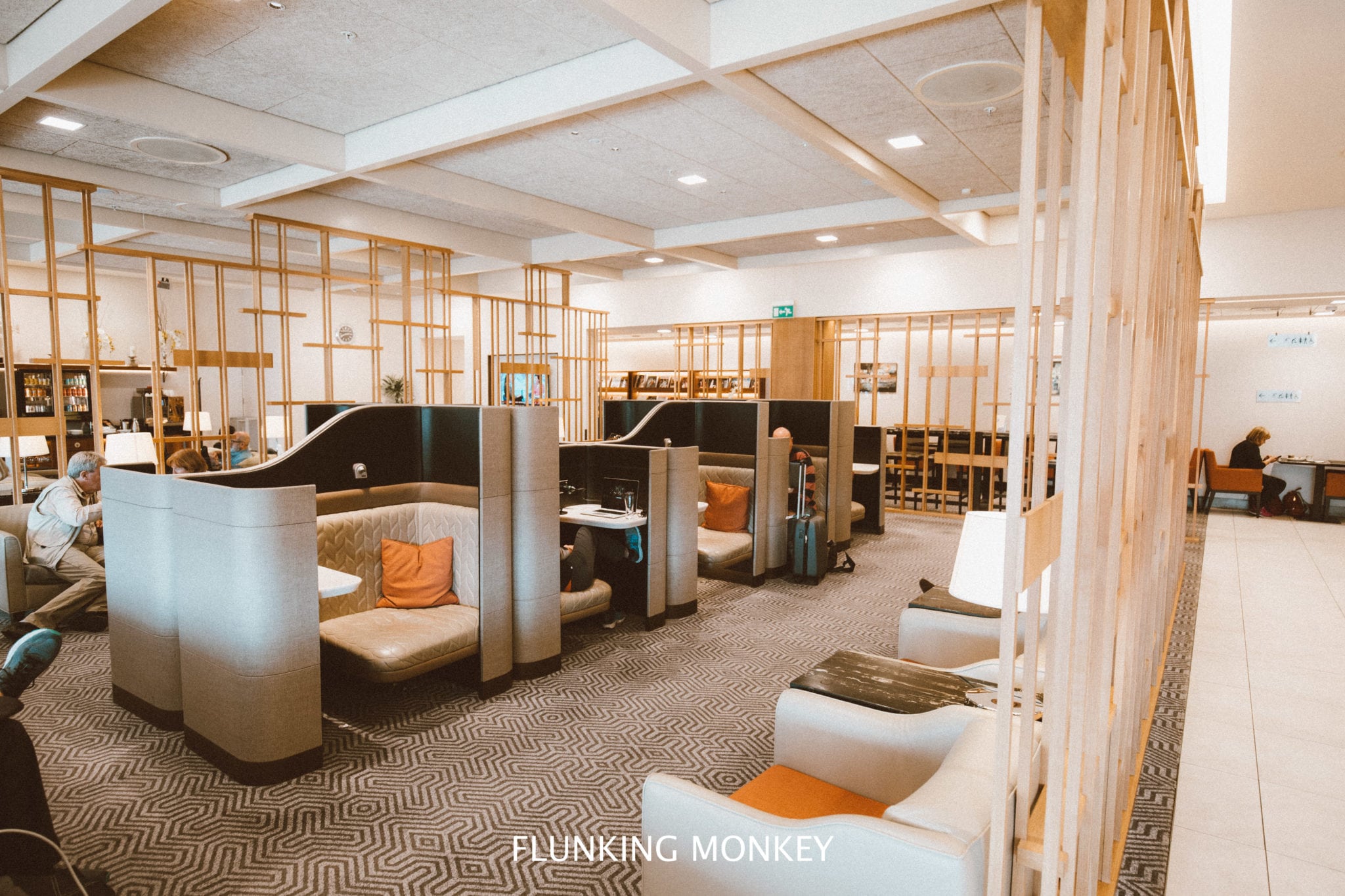 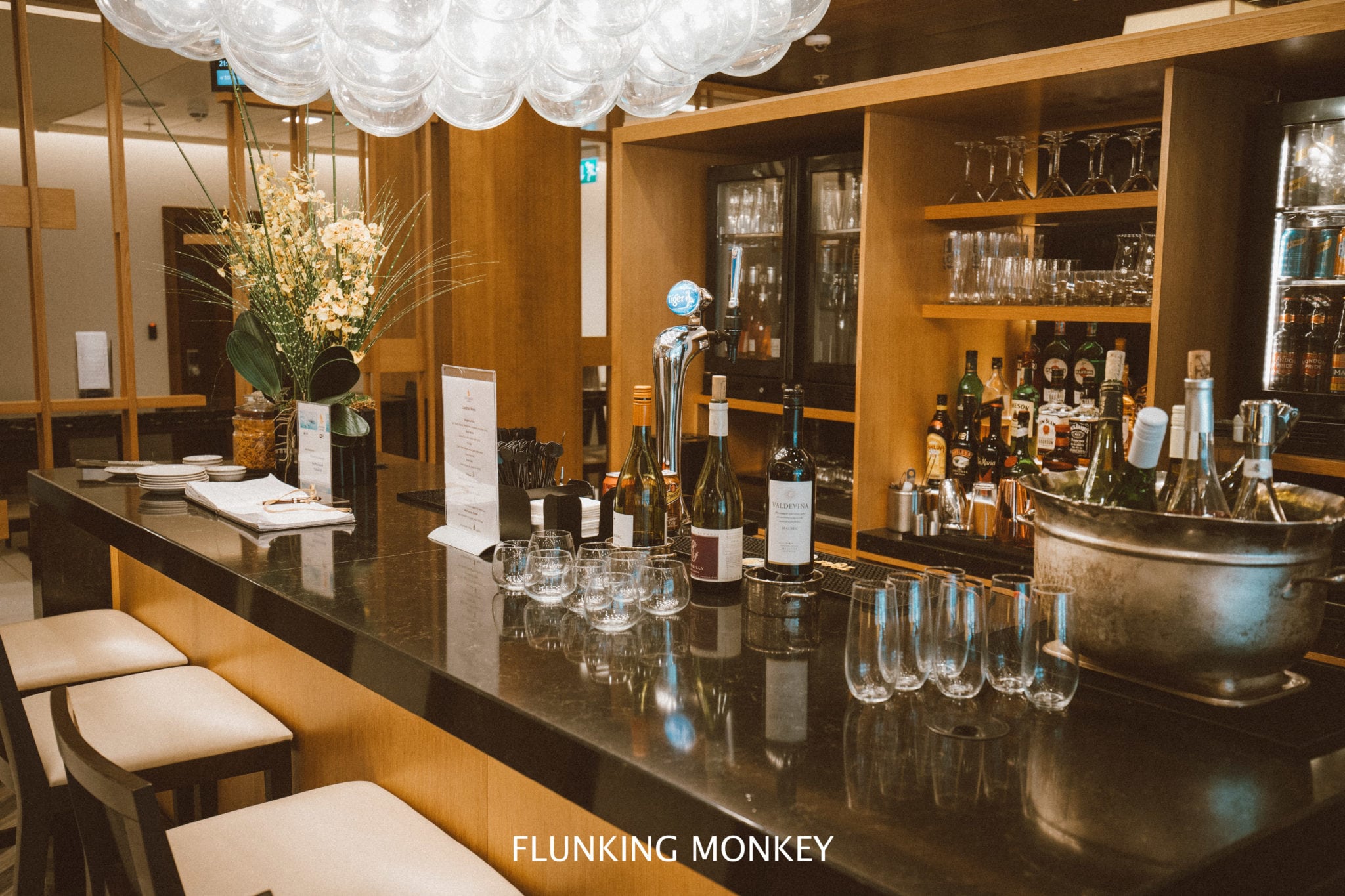 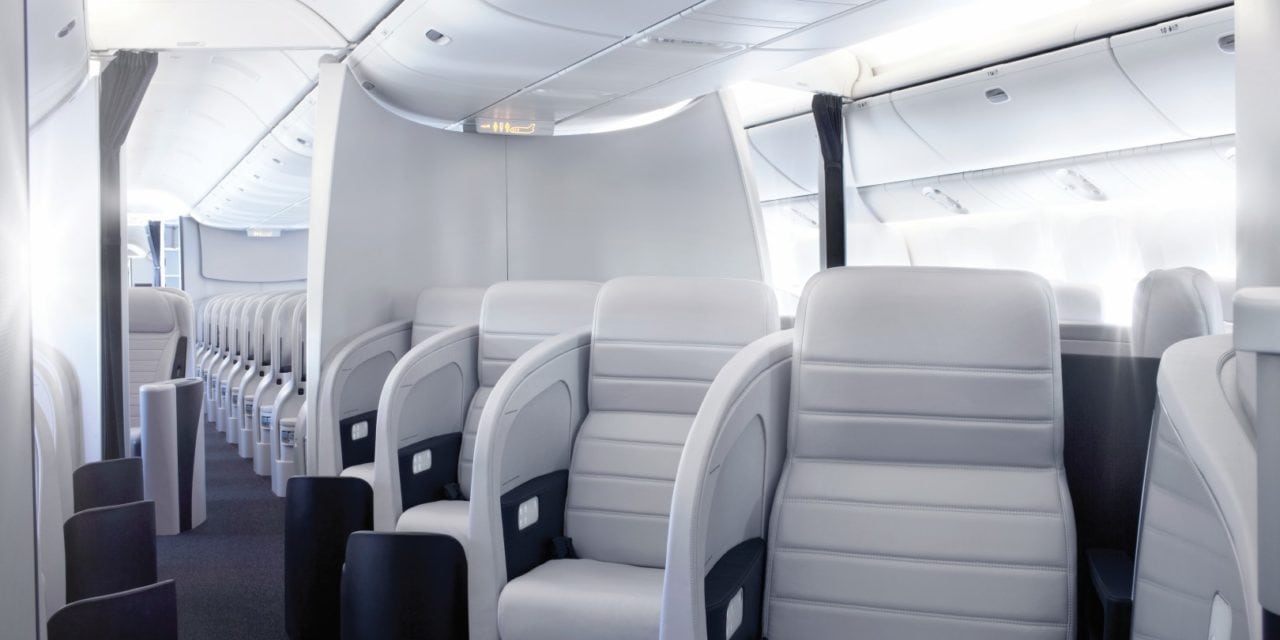 I wasn’t entirely sure what to expect as we began boarding the aircraft, as with standard boarding protocol for all airlines business class passengers are invited to board first for at their own accord via their own entrance tunnel.

As we boarded you could see Air New Zealand has opted for a futuristic grey and white decor, with a unique layout I had not yet come across.

Throughout the flight cabin, the attendants were friendly and more than happy to talk and have a laugh with you. Usually, I can find flight attendants a bit cold and fake in their approach towards passengers but this wasn’t the case when flying with Air New Zealand to Los Angeles. A staff member nicely offered to explain the seat operational function to me and was more than willing to answer my question and assist me with any matter throughout the flight.

Air New Zealand business class is laid out in a 2-2-2 format of beautiful soft white leather seats embedded in a white curve design with collapsable social walls for the middle rows.

Amazingly this was the first time I had witnessed a business class seat which folded forward onto itself to form the bed, rather than the standard downward attachment to the footrest. A downside was that you have to get up to convert the seat into a bed which isn’t ideal on a cramped aircraft, however, I found it was well worth it as the underside to the seat actually held a comfier bed base. Air New Zealand was also one of the first to provide a mattress to place on the bed, something which came as more than a pleasant surprise as it did wonders for the comfort of sleeping on an aircraft. I mean as great as it is to be able to sleep on a plane, it’s still not a substitute for an actual bed, but Air New Zealand definitely made you feel as though you were a step closer than on other airlines.

Strategically located on the curve of the seat in front of you, you find your entertainment screen and large tray table. Adding emphasis to the sleek design I did enjoy the way it decluttered your area, especially considering you’d want all the space you could get on an 11-hour flight. I found the screen very small for business class, especially compared to other major carriers and the design tedious for operating around your tray table during meal times.

Air New Zealand’s entertainment system kia ora, definitely made up for their small screens, boasting a large selection of television shows, films and music. As an indecisive person, I struggled for quite a while determining what to watch or listen too. 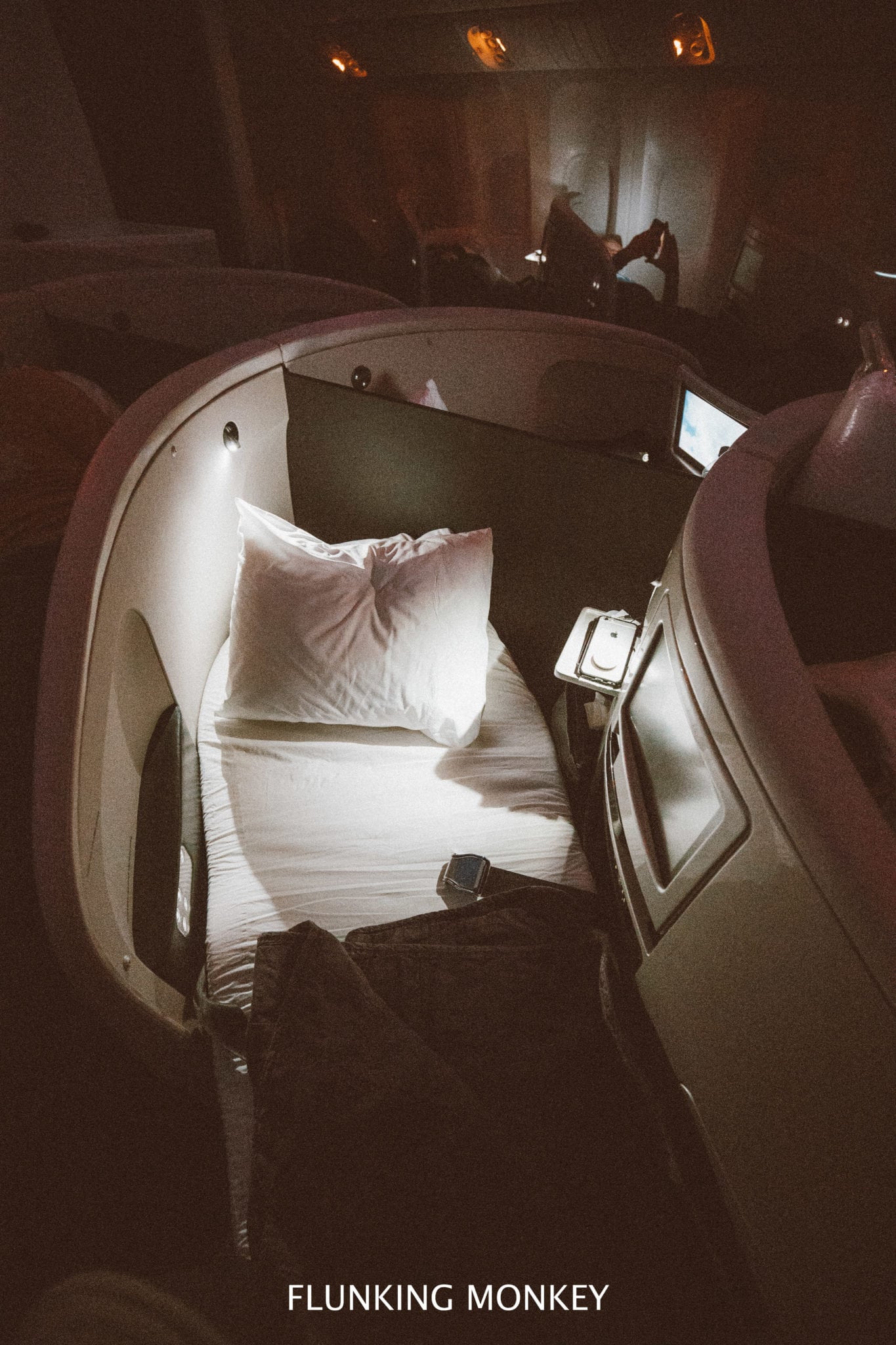 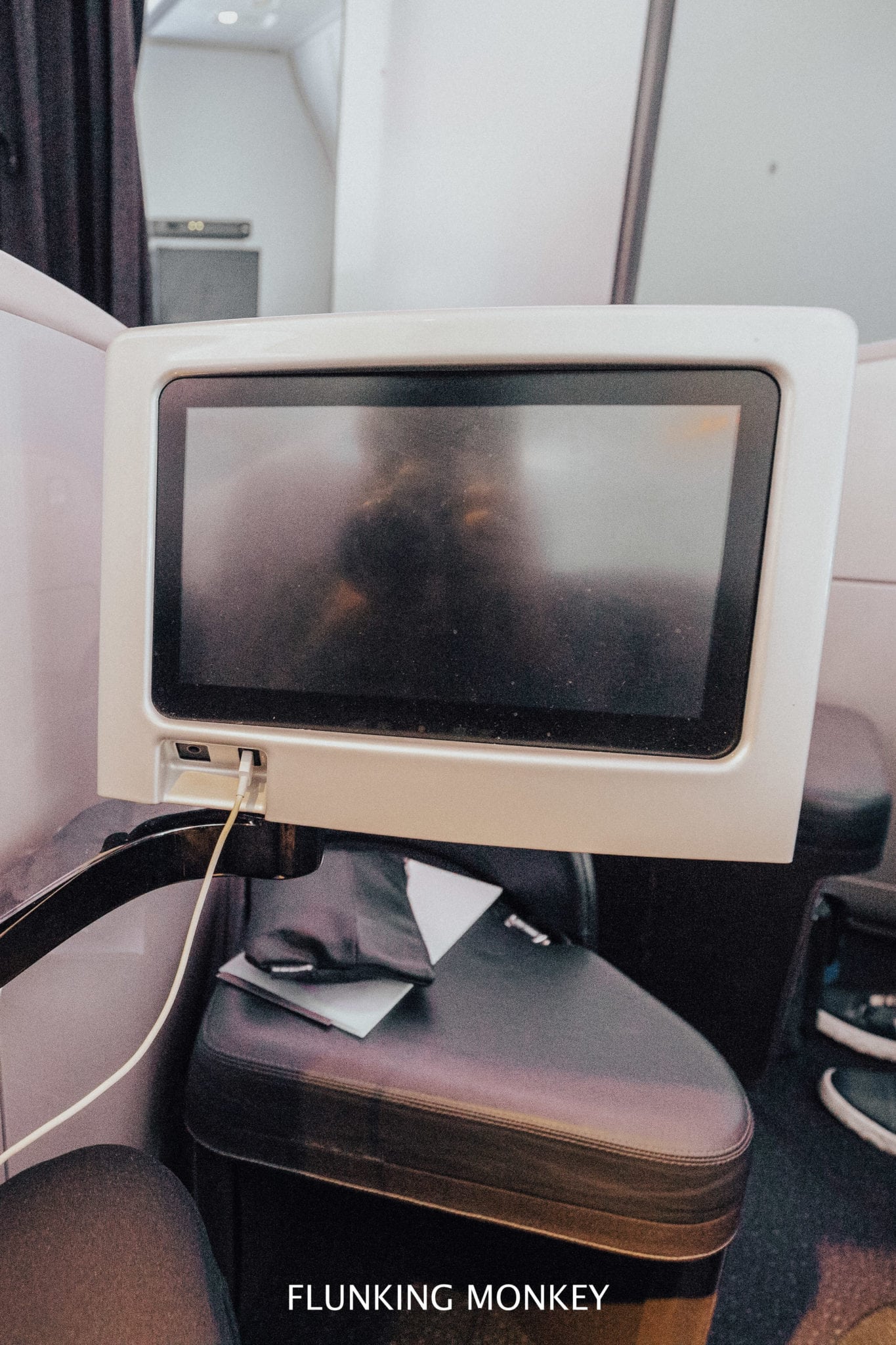 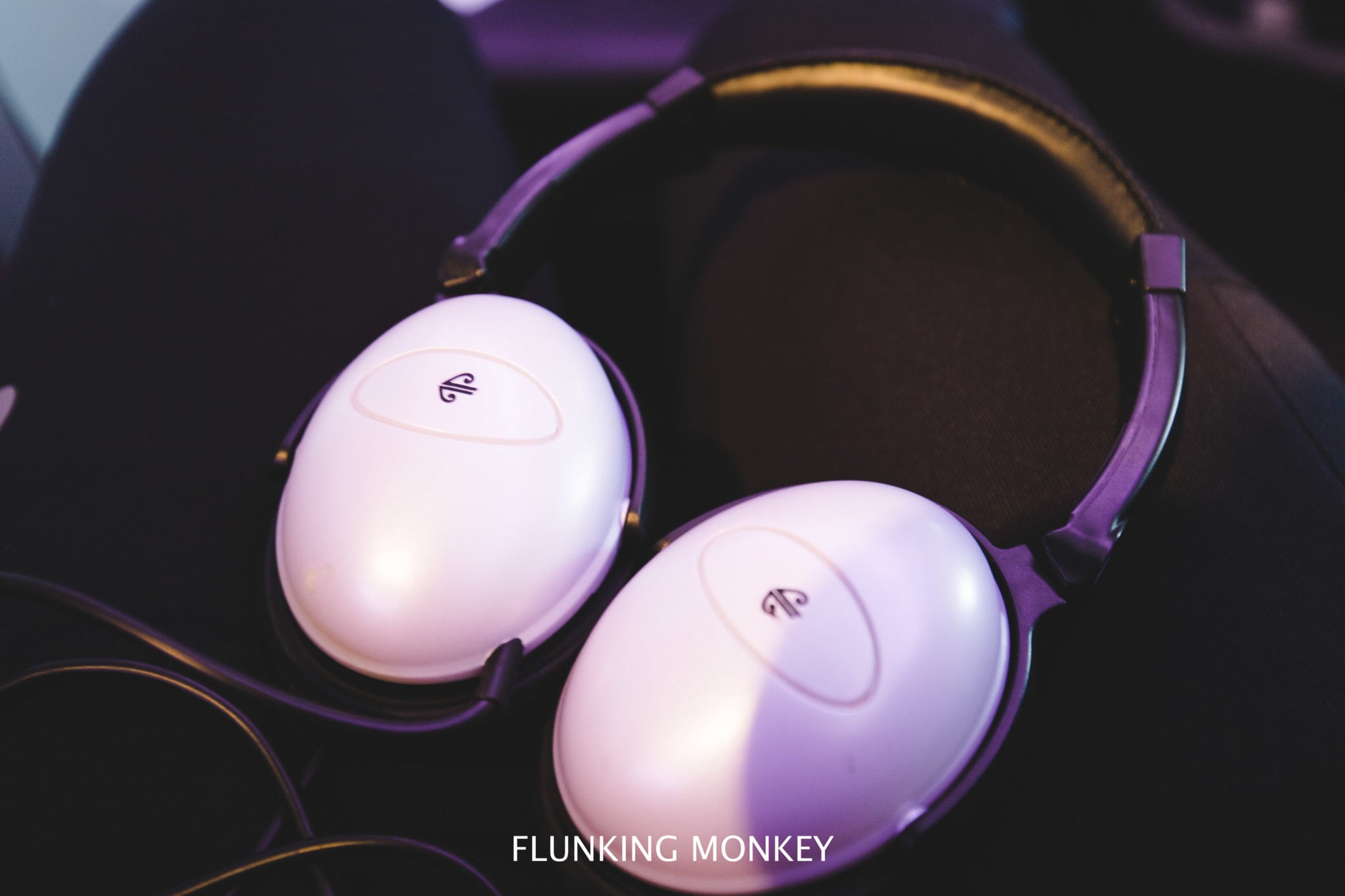 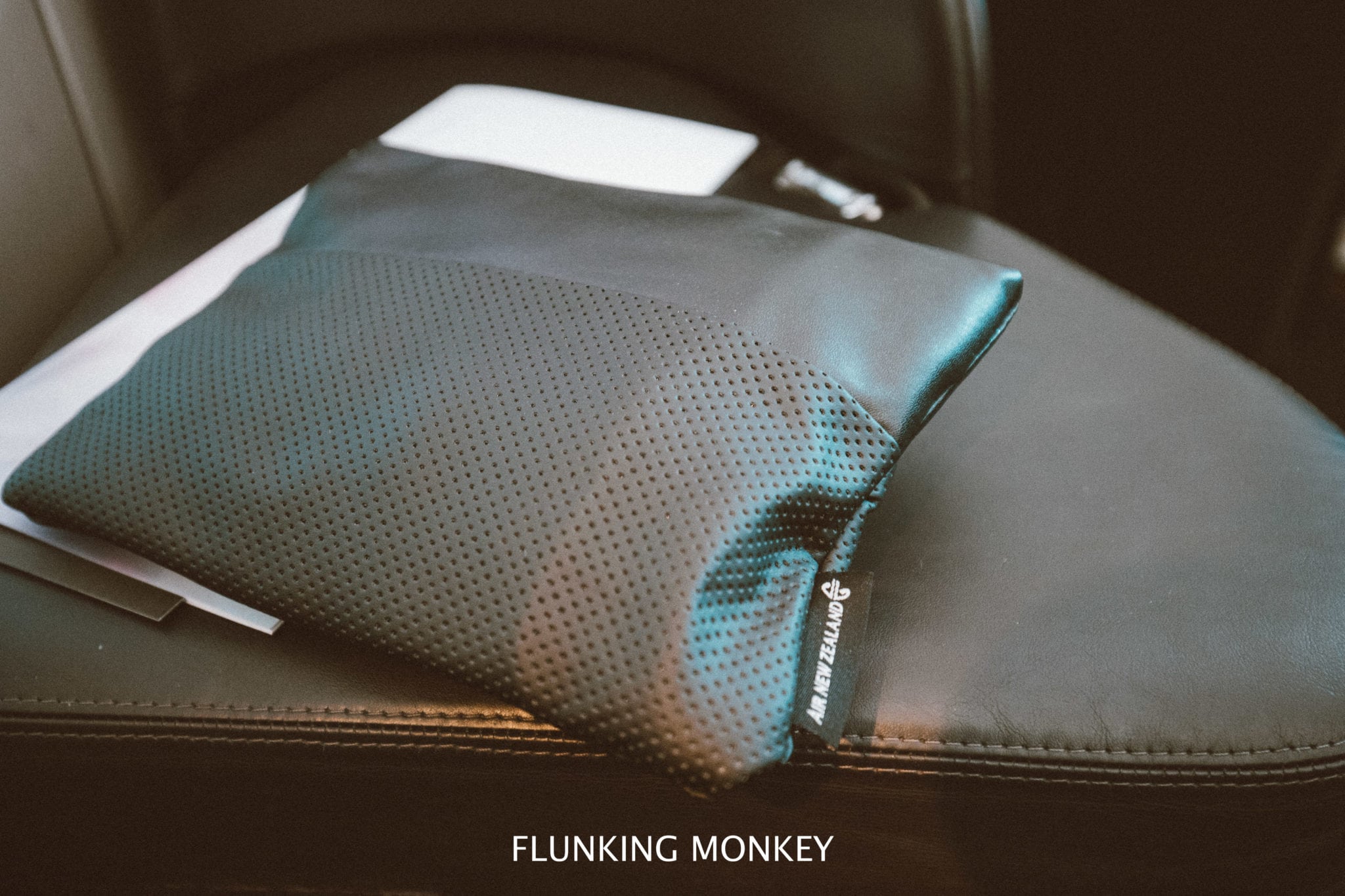 One of the great perks of business class travel is the gifting of a usually beautiful amenities bag with goodies inside. Air New Zealand partnered up with Ashley & Co to provide you with Sooth Tube hydrating hand cream, Lip punch intensive lip balm alongside the classic collection of socks, eye masks and dental gear all wrapped up in a smooth black leather bag.

As a great addition to many major air carriers, we are now given you the option to access wifi whilst onboard the aircraft. This can sometimes come at an extra cost, as it does with Air New Zealand costing around £20 GBP. Unfortunately, I learnt the hard way that their wifi service is only really strong enough for you to carry out light email work, not including any form of attachments. This definitely felt like a waste of money on my behalf but was a learning experience all in the same, I don’t particularly agree with charging this excess particularly to business class passengers who are already paying a hefty price for their tickets. So as much as I appreciated the option I believe this is an area Air New Zealand could pay particular focus to, as currently, airlines like Qatar provide (occasionally free) Wifi which is super fast. 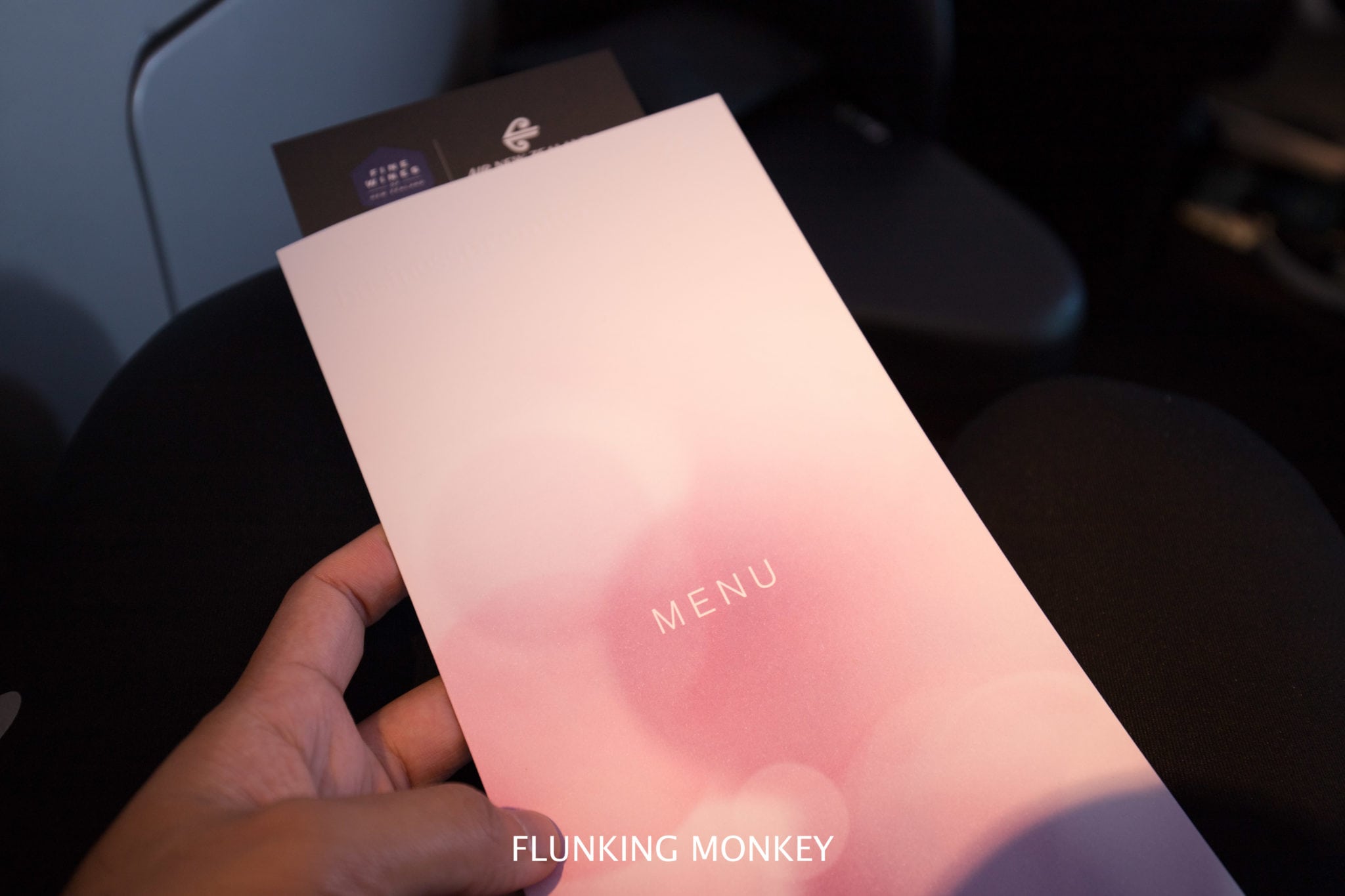 The Food and Service

Something I was really impressed by was the level of quality and variety when it came to the food. Not only was food served with consistent smiles it was presented fantastically with no detailed spared from the placement of bread to the garnishing. Each dish looked unique and had was embodied with a fusion of different worldly elements.

With an 11 hour flight time, we were served with 2 meals with an optional additional selection of snacks. Amazingly they even went to the effort to bring aboard fresh New Zealand doughnuts which were a really nice added touch, although I wasn’t a huge fan of the interesting mix of flavours such an “Earl Grey Cream”. 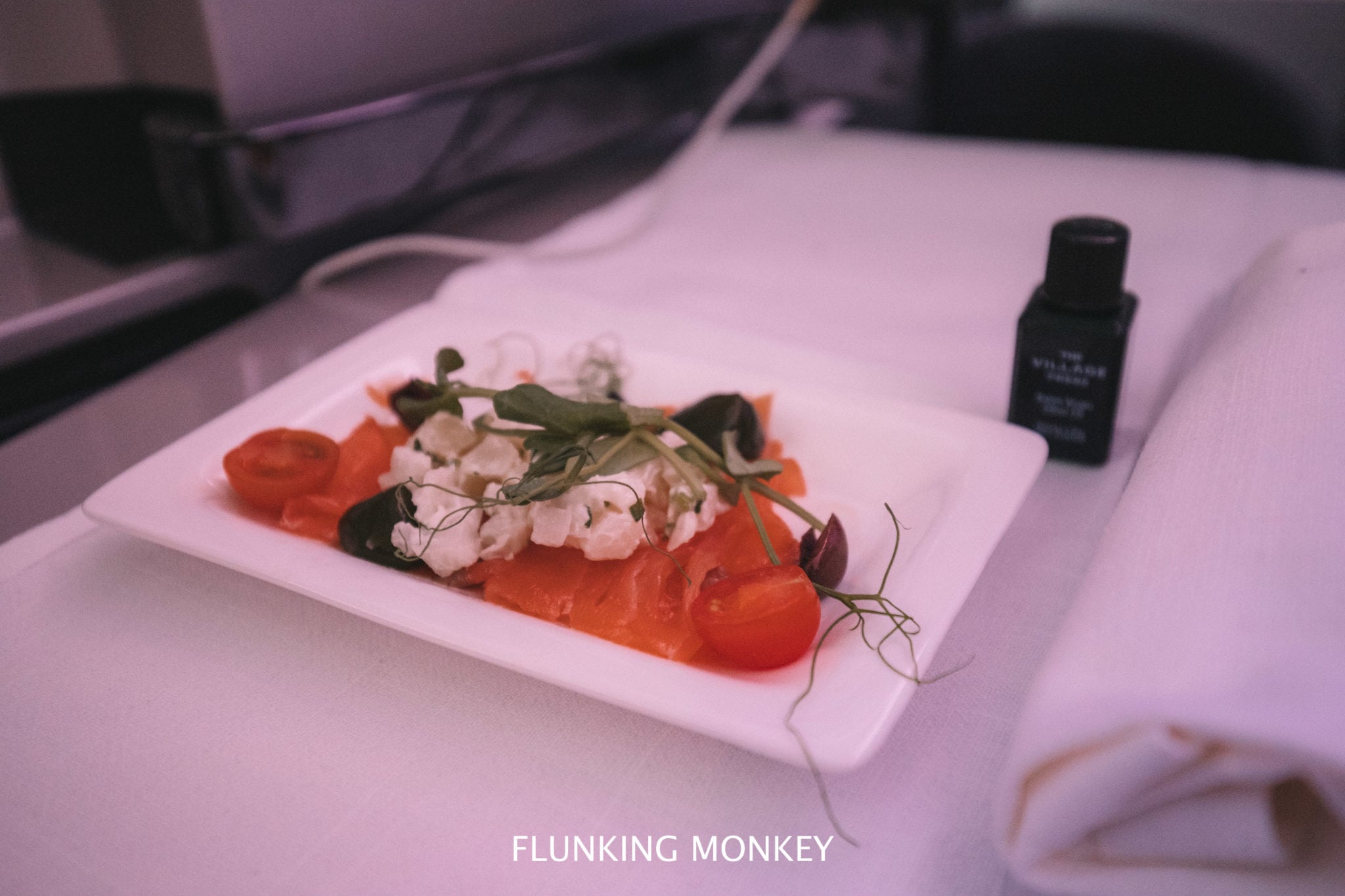 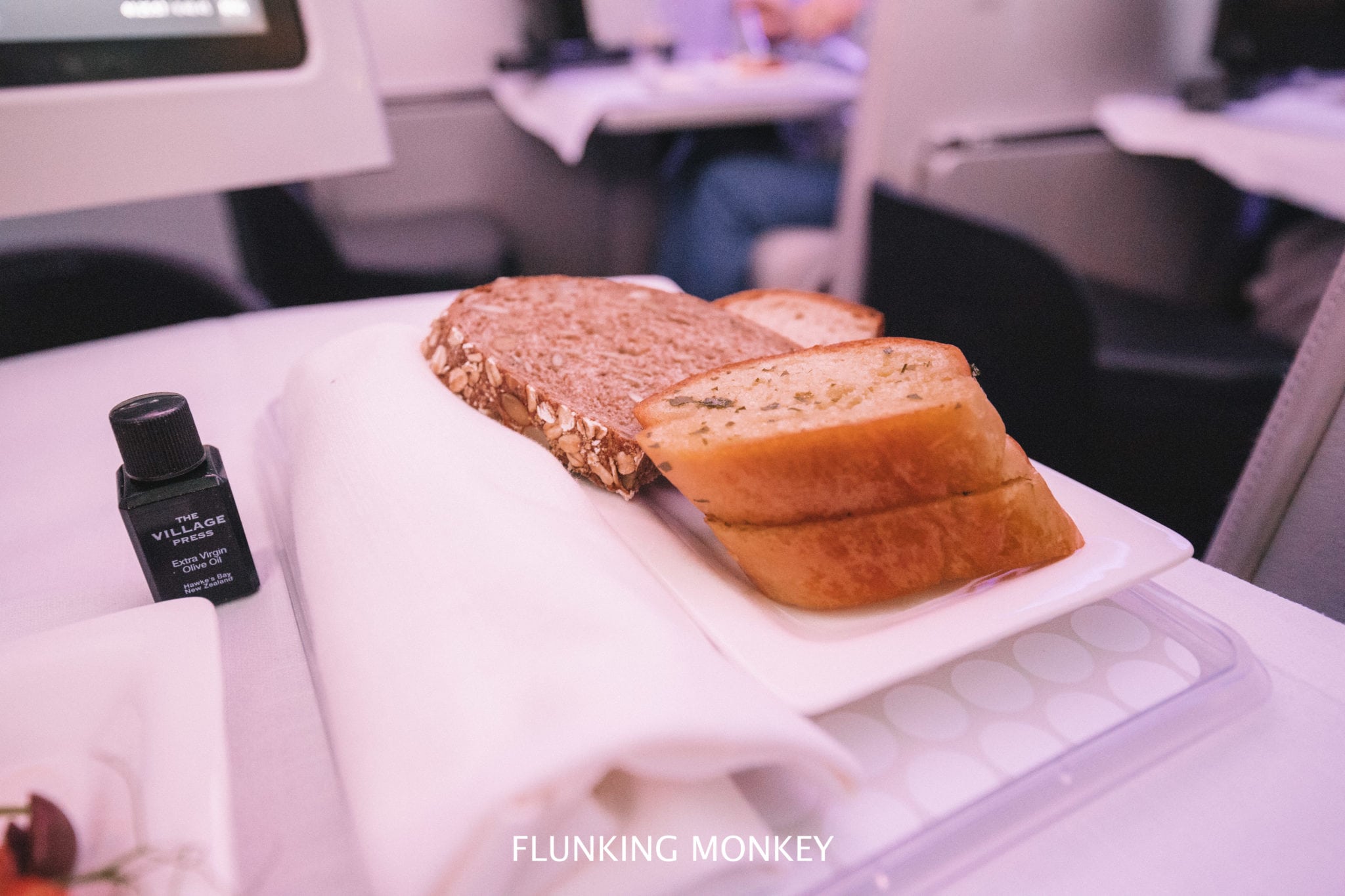 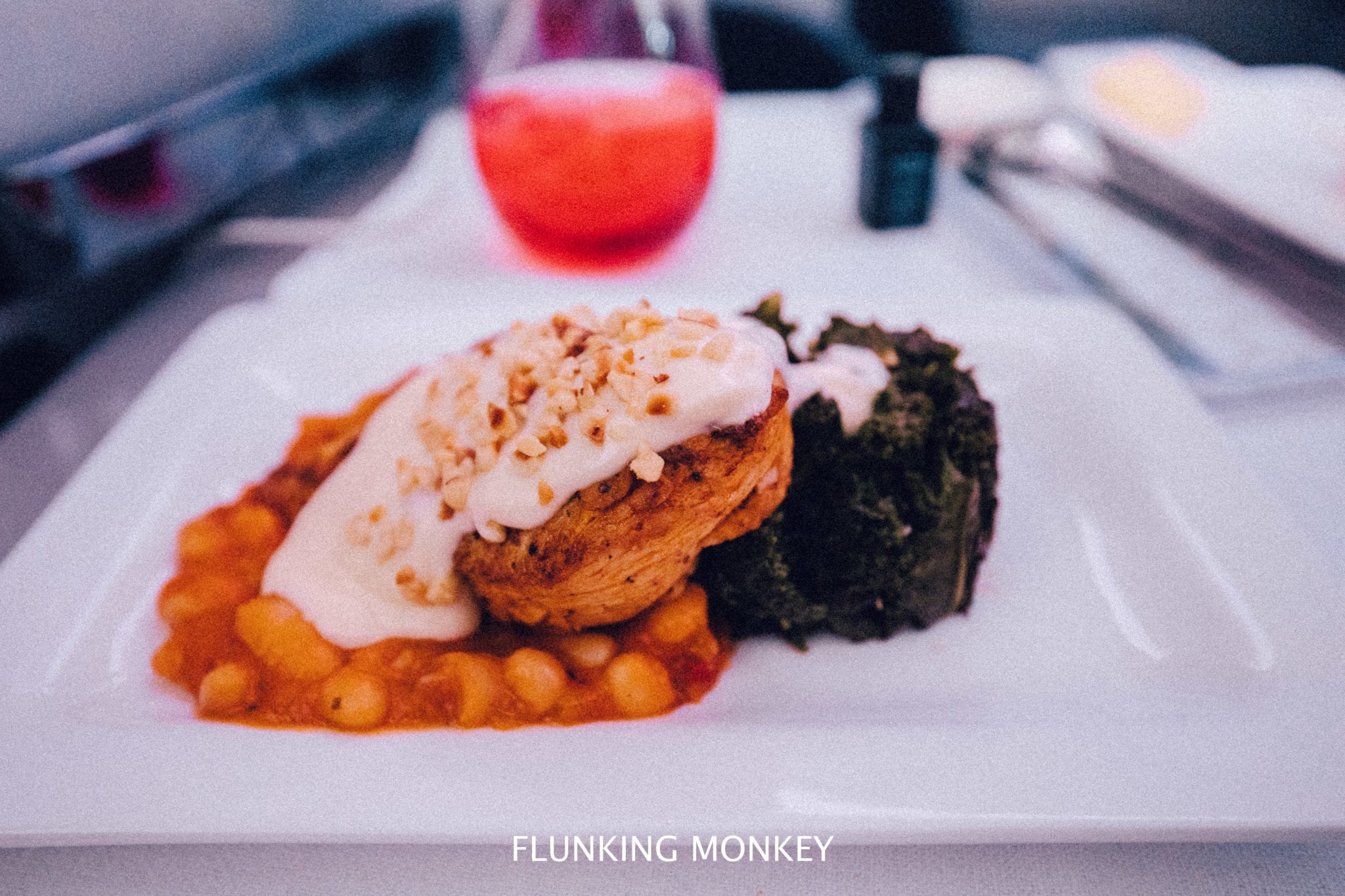 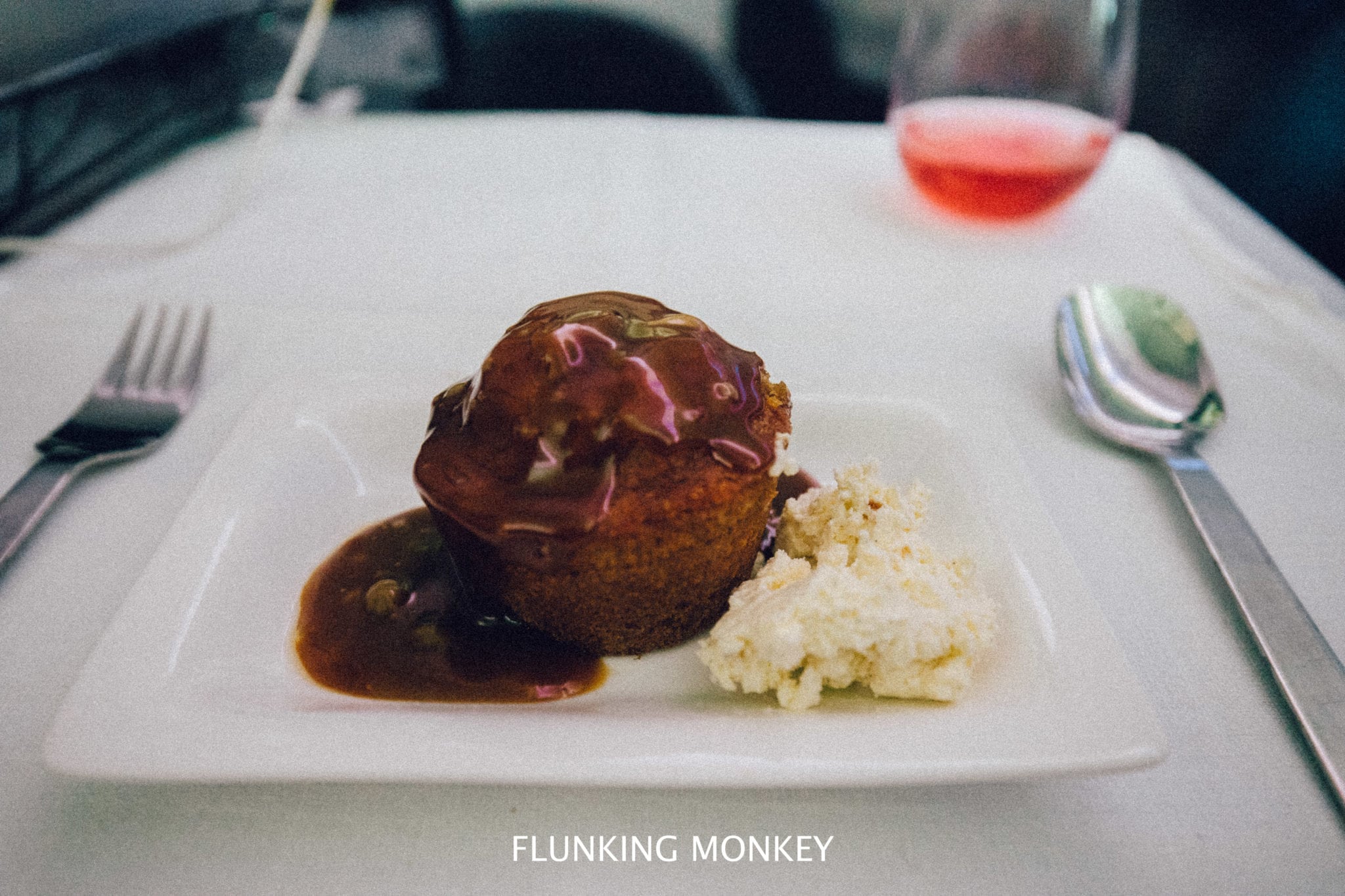 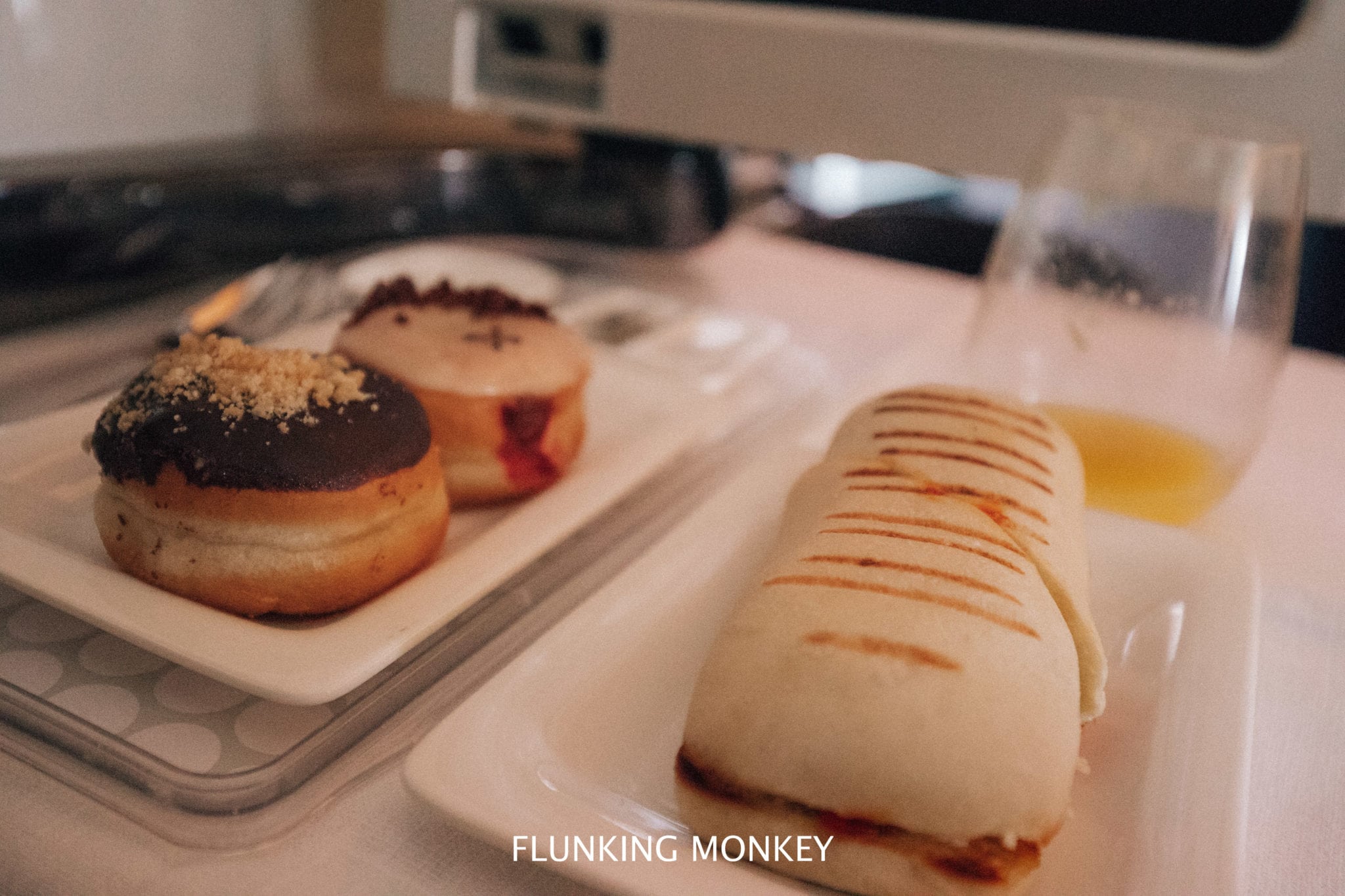 After spending a week having an Ultimate Californian Adventure. We were due to head back out of Los Angeles International to London Heathrow, again via Air New Zealand. We arrived at the airport slightly later than intended which again we were glad to see no queues for the check-in counters. As in London, our check-in, in LAX went very smoothly but we did face large queues during both immigration and security. I always try to make sure I get to the airport for international flights way ahead of time, around +3 Hours.

The Lounge at LAX – Star Alliance

Due to the large queues at LAX we only got to experience the Los Angeles International Star Alliance Lounge for around 10 to 15 minutes. The lounge was much larger than the Singapore dedicated airlines lounge in Heathrow, which was understandable as this was a Star Alliance dedicated lounge catering to passengers from all partner airlines.

A particularly great benefit of this lounge was their outdoor terrace, perfect for taking in those last bit of California rays before heading back to the usually cloudy U.K. Their decor was amazing and had I more time, I definitely would have enjoyed a drink or two here as we looked out onto the L.A. Skyline to say goodbye to California. 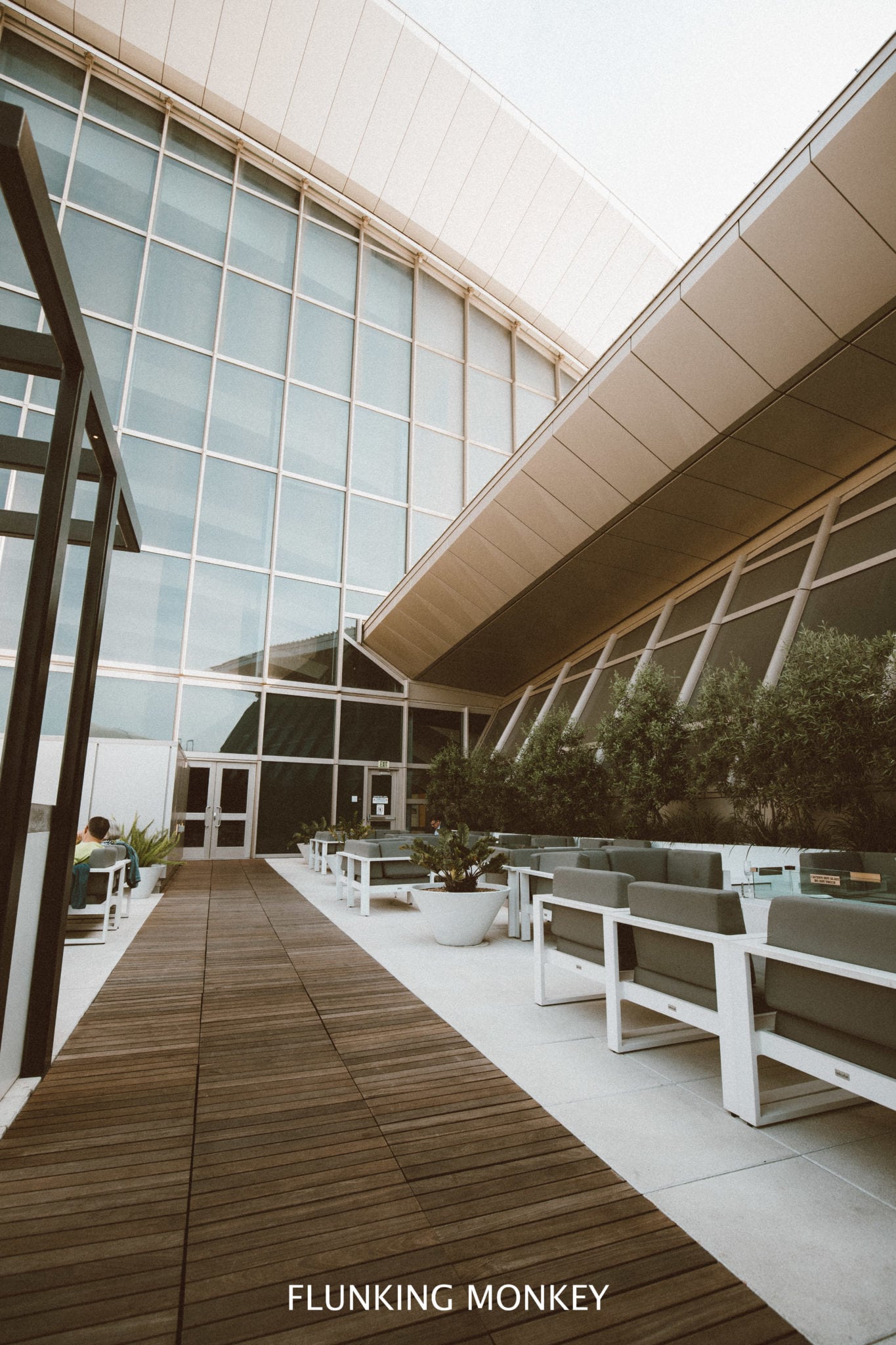 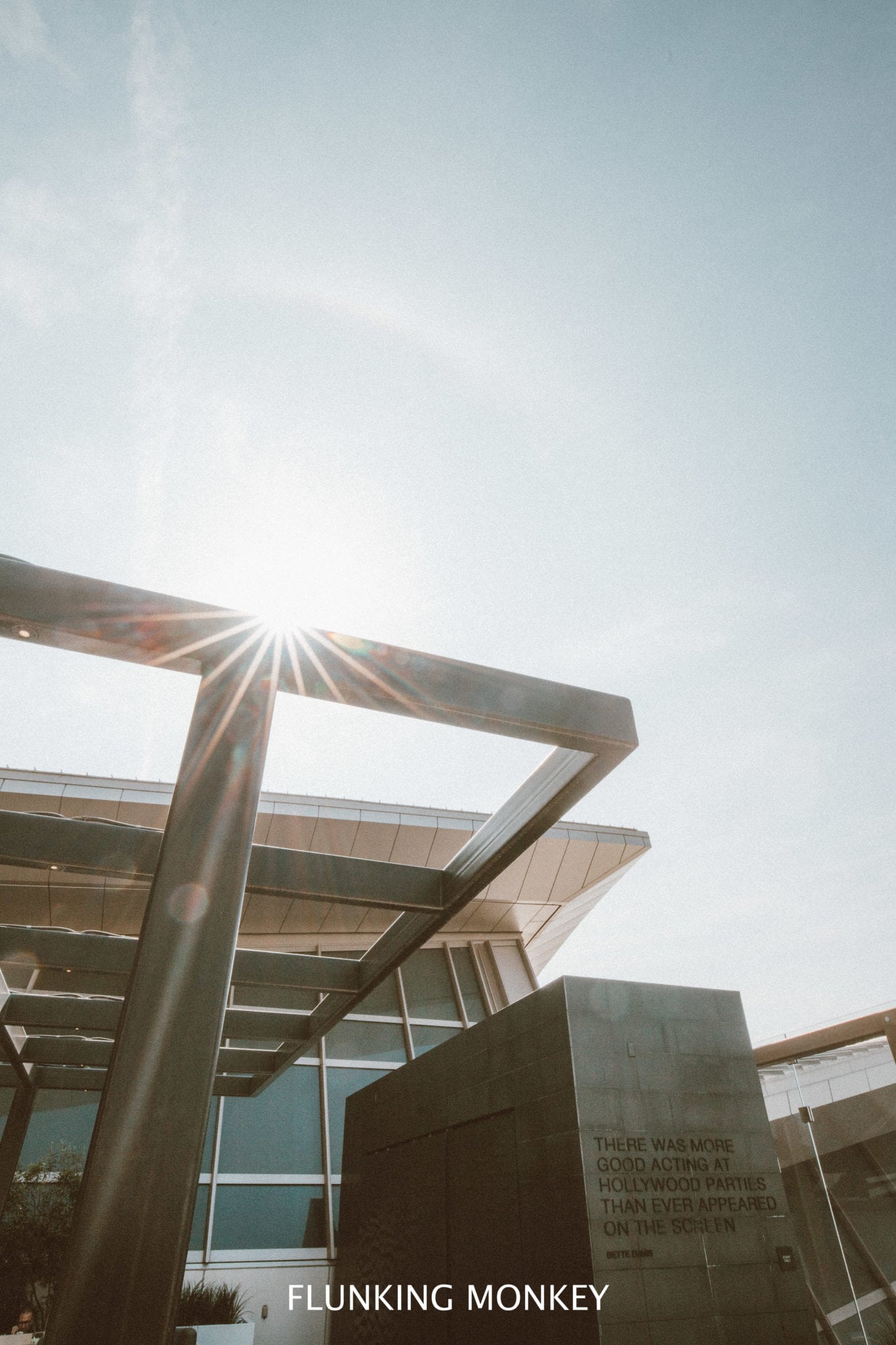 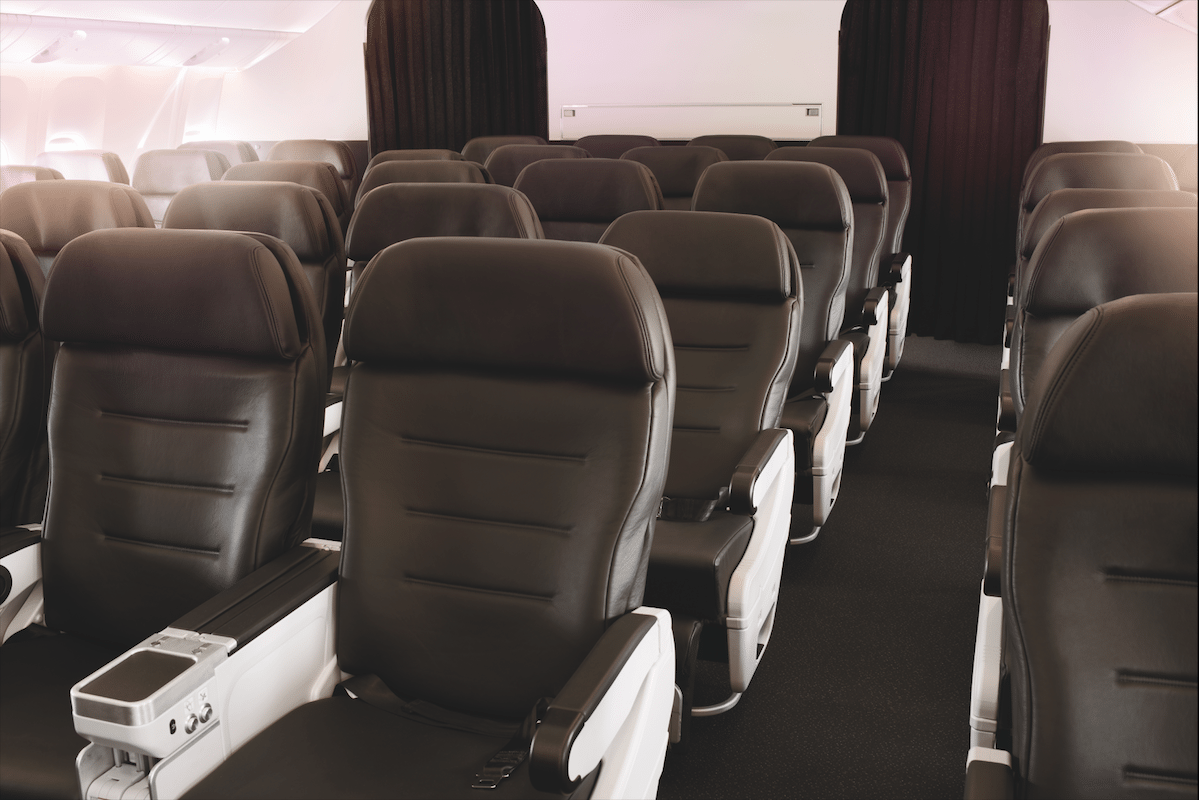 Walking past business class and queuing up to board with the ‘normal’ passengers we found our seats located in between the economy and business class cabins. Looking quite comfortable on first impressions, similar to business class Air New Zealand premium economy had a very clean cut, appealing minimalistic look to it.

Laid out in a 2-4-2 pattern Air New Zealand soft black leather seats made it feel like the space available here was a lot larger than of that in business class. Unlike the business class, the seats were a lot more simplistic and easily operable by a frequent airline flyer as they were moulded more closely to classic economy style seats.

The leather was more comfortable than I thought It was going to be, non-sticky and very cushioned all around for pure comfort. I was also surprised to find they gave their premium economy customers the same pillows provided to their business class passengers, it was the perfect added touch.

The seats have a wide pitch to them and had a lot of leg room, I did not feel cramped at all being 6ft+. Unfortunately, I didn’t particularly find the seats comfortable for sleeping, although the leg rest did extend far up the seat dropped back only so far backwards, and the seat area can get uncomfortable when the seat in front is in full recline. Saying this, you have to expect this with Premium Economy as it is just a more ‘luxurious’ version of Economy and not Business or First Class.

The entertainment system on the return flight was the same as on the way out including all the same titles. I did prefer the placement of this screen being placed directly in your eye line on the back of the seat ahead. One thing I did find frustrating was the fact when the seat ahead is in recline, the screen only tilts up so much, making it slightly uncomfortable to watch. 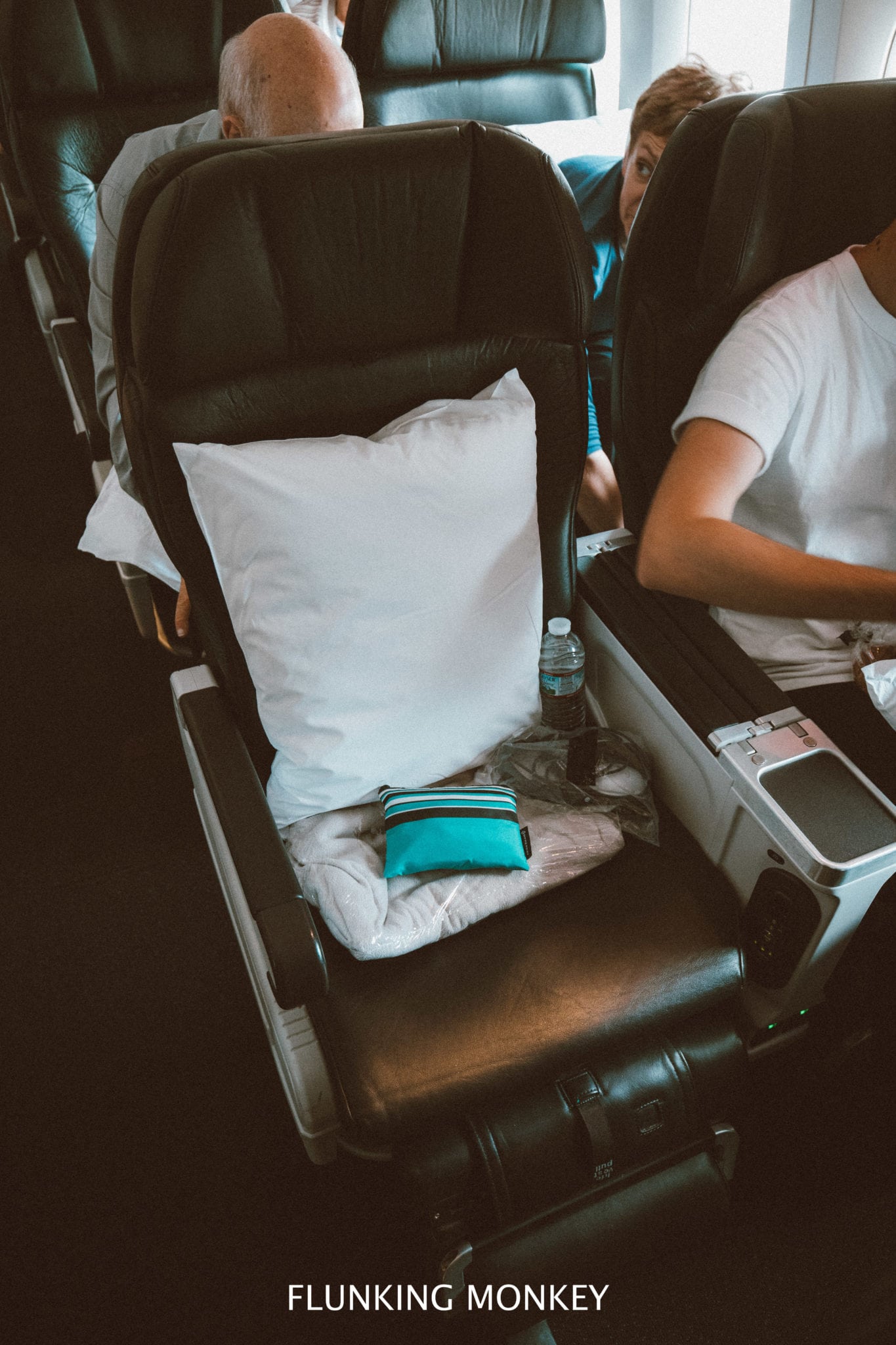 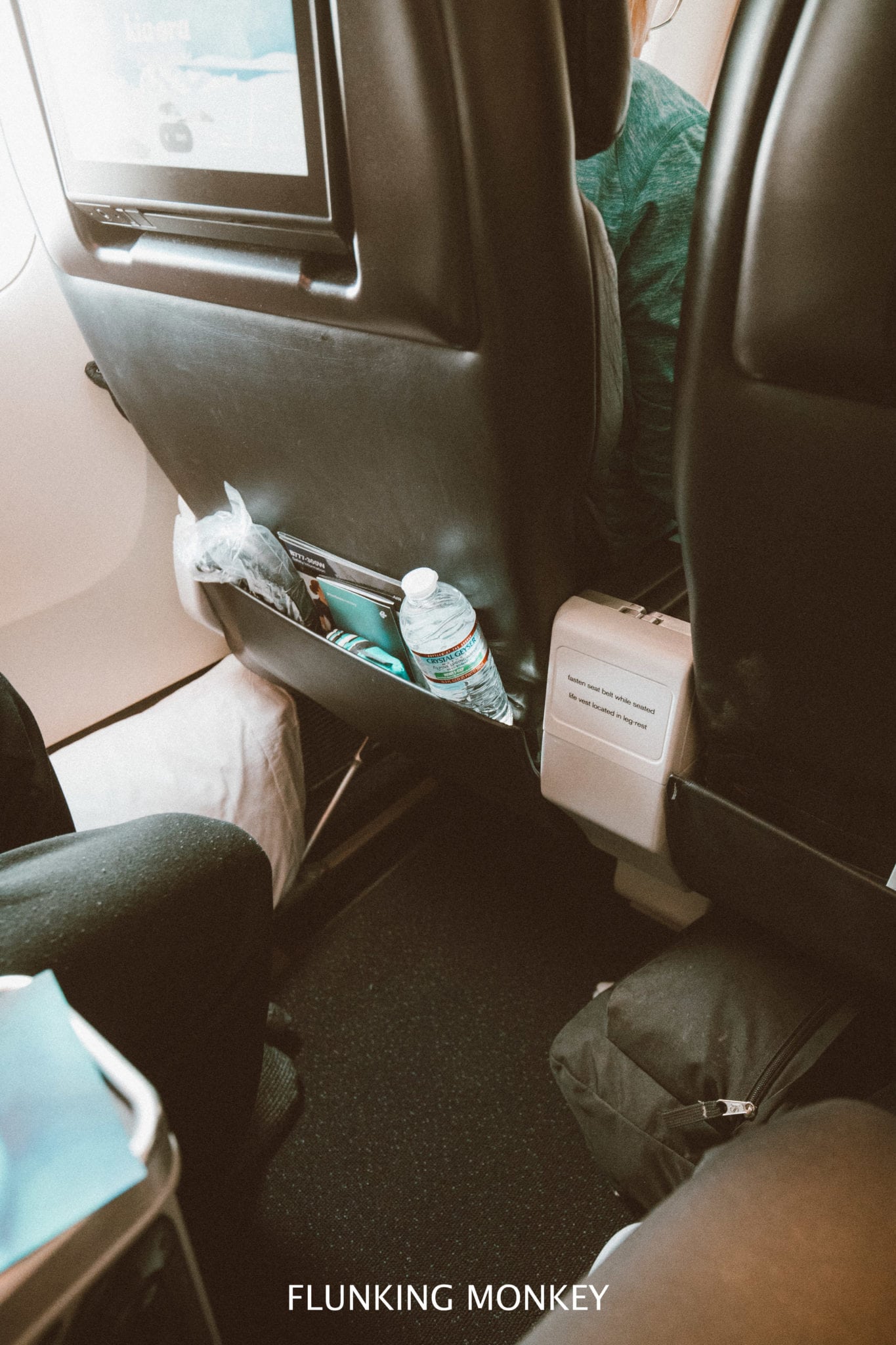 I appreciated that we were once again provided with an amenities bag. This time a little smaller and ‘cheaper’ than that of business class with colourful polyester type bag. The provisions only differed by one Ashley & Co item which was the hand cream.

I wasn’t entirely sure what to expect when food initially began to be served, whether I was expecting Economy standard food or business class luxury.

Served more similar to what you expect in Business Class, via menu format and on actual dishes rather than plastic and tin, you could see Air New Zealand definitely went to lengths to ensure the food on their flights was enjoyable. With elements like garnishes less thought about, the focus came more to the food which definitely came with a punch with a variety of flavourful dishes.

Again the food was served in a Starter (oddly with dessert) and Mains format, with cabin crew offering a selection of bread, along with pairing wines for the meal. 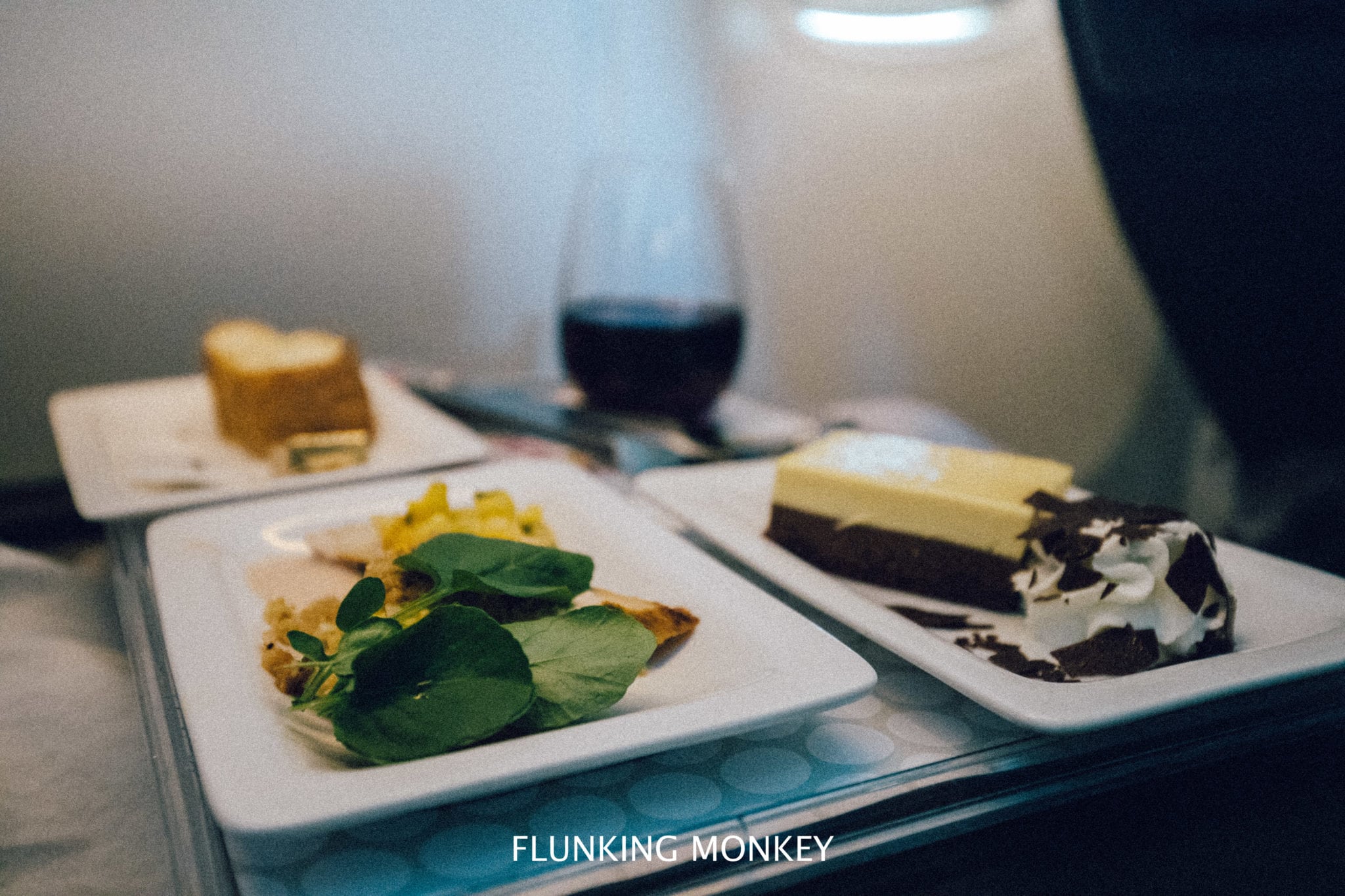 I believe throughout my journey Air New Zealand truly showcased how airlines should operate and lived up to its title of Airline of the year. They treated their passengers with equal respect regardless of their ticket class and displayed a dedication to customer service and a positive flying experience.

Well, I hope you guys found this article interesting and insightful! Let me know below if you have any thoughts or questions! 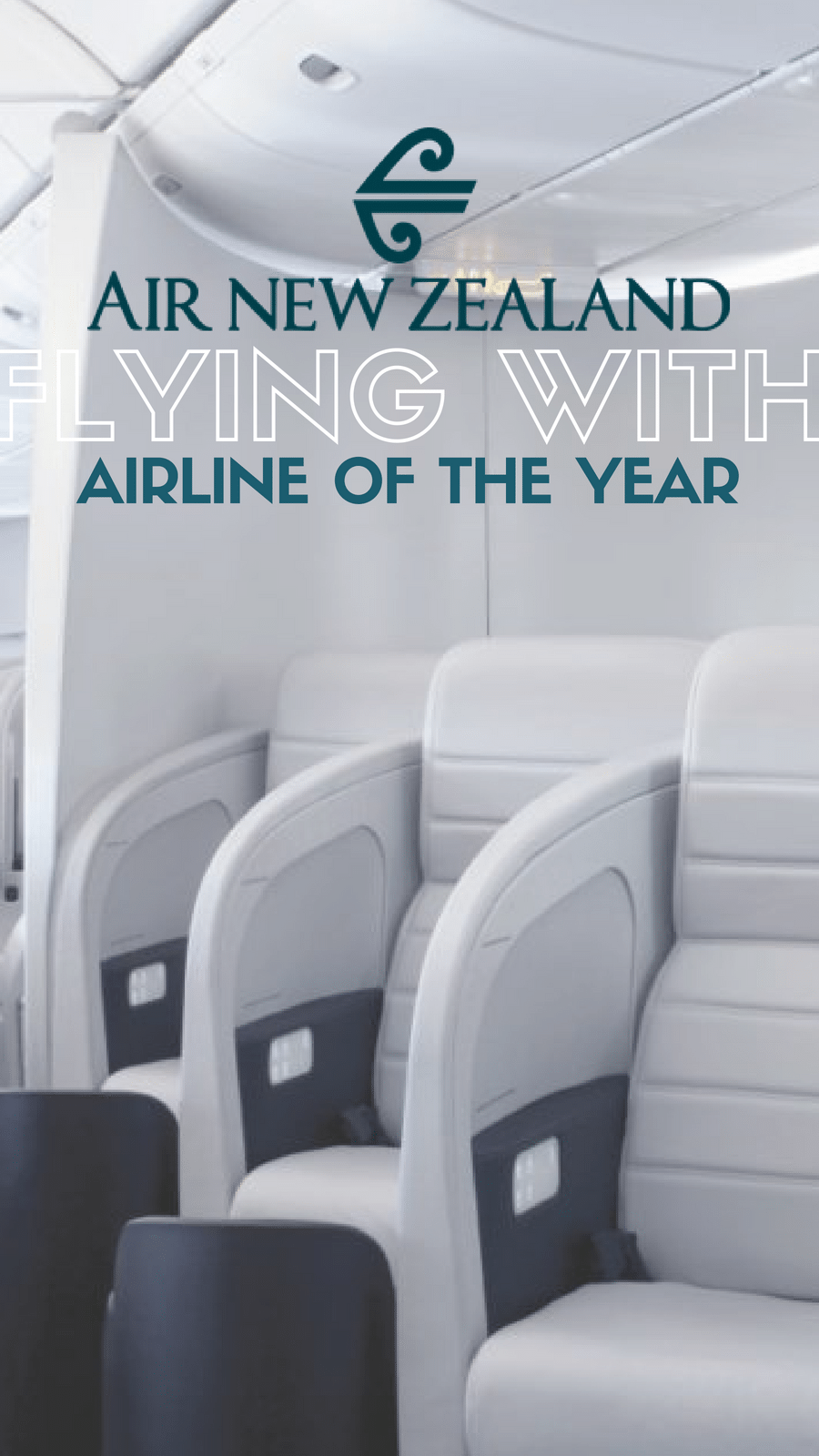